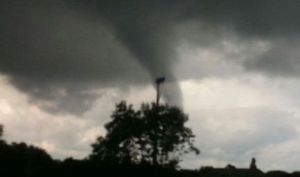 As these terrifying pictures show, a series of fearsome twisters ripped through Lincolnshire this afternoon as experts insisted ‘much worse’ is to come over the next few days.Geoff Hill, 54, photographed one tornado as the skies suddenly darkened around Market Rasen at 3pm.

The logistics boss said: “It was spotted by one of our store staff working outside looking up at the sky. Somebody rushed in and said there’s a tornado.

“We dashed outside and I grabbed my camera and took a picture.

“I actually caught it on the second go because it had formed for five minutes before and then disappeared.

“Then it formed again and appeared for another five minutes.”