Do you want Christ to take control of creation, including this planet? Or do you want to remain under a satanic empire that cannot even feed the masses adequately? Satan offers no real incentive to remain in his family. He cannot offer you good health, even though he tries, or a cure for dreaded diseases, even though he has mankind searching for cures. Make no mistake. Satan wants his empire to flourish and be like Yahweh’s spirit realm and the rest of creation in the expanse, but the way he leads, and the factions within his family, it cannot be achieved. 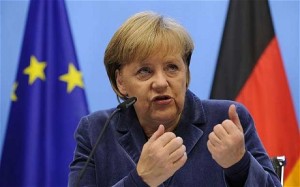 As someone who works in financial services, I follow the markets – in the West, across Asia and the entire world – closer than most. Since the Bear Stearns collapse in March 2008, through the demise of Lehman Brothers and its ghastly aftermath, much of my professional life has been dominated by the angry flashing of those little lights on a Bloomberg screen.

In recent years, the violent gyrations on financial markets have been deeply discomforting, causing angst among market professionals, like me – but that is the least significant aspect. For those little lights represent, of course, the ebbs and flows of cash which, in turn, determines the fate of real businesses. It is at the sharp end of employment and livelihoods, dispossessed homes and broken families that the human impact of financial turbulence is most keenly felt.

So, yes, I want such turbulence, which will never be fully-eradicated, nor should it be in a free-market system, to now lessen to more manageable levels. Yet the responses of our politicians to recent financial troubles – hiding behind complexity and kicking the can down the road – have not only failed to temper the volatility, but have actually made it much worse.

The deal itself, unveiled dramatically in the early hours of Thursday, was met with the now obligatory “relief rally”. The FTSE All-World equity index soared 4.1pc, helped by signs of renewed US economic growth. European bank shares spiked no less than 12pc on Thursday, as traders recognised, for all the official obfuscation, the latest dollop of government largesse.

By late Thursday, though, and certainly on Friday, the warning signs were there. Global bond markets, by character more sober and smarter than the excitable equity guys, were voting against the deal. This is alarming. For it is only by selling more bonds that the eurozone’s deeply indebted governments can roll-over their enormous liabilities and keep the show on the road.

Some say Western governments shouldn’t “accept” what the market says. “Who do these trading people think they are,” I hear from the lips of the educated but financially-illiterate political elite. Let’s be clear – if global bond markets stop lending to a number of large Western economies, we are in the realms of unpaid state wages and pensions, transport chaos and closures of schools and hospitals – sparking the prospect of serious civil unrest. Forgive my intemperate tone, but these are the dangers we face. And I’m afraid the only rational response to Thursday’s announcement is that the probability of such undesirable outcomes has just been increased.

European leaders have reached an “agreement”, we were told, with the private holders of Greek debt, who now accept a 50pc write-down on their stakes. This is predicated on an additional €120bn (£105bn) cash-injection by EU member states and the IMF. By paying bond-holders less, and making other savings, the hope is that Greece can cut its sovereign debt from 150pc of GDP to 120pc in the next few years.

This deal was presented as a “victory” by the eurocrats. After all, back in July those nasty private creditors agreed only to a 21pc “haircut” on their Greek debt. The deal is “voluntary”, though, nothing having been decided except the “50pc haircut” headline. In reality, by bargaining hard over coupons and maturities – how much the bonds will pay annually, and for how long – those who so unwisely lent money to Greece (eager to reap high yields, while always expecting a bail-out) will get a much sweeter deal. This is the discussion that will take place, behind closed doors, during the coming months. But that sweeter deal will need to be paid for with yet more sovereign borrowing, by some eurozone government or other, plus further sack-loads of taxpayers’ cash.

It is telling that Greek bond-holders themselves were on Friday reassuring their investors that the reduction in the net present value of their stakes, compared with the “21pc haircut” deal, “will not be overly onerous”. In addition, the July agreement, while also “voluntary”, included a 90pc creditors’ participation. Thursday’s variant cited no such number.

So, the centre-piece of last week’s “package” is far less decisive than meets the eye. It was, in fact, singularly indecisive. The hope that Greece will clean-up its balance sheet autonomously now relies even more on a privatization programme that is already laughably behind schedule. So the moral hazard will go on, making it tougher still for the governments of Portugal, Ireland and the other eurozone “peripheries” to sell to their electorates the virtues of fiscal responsibility. These are not clever-clever academic points. I’m pointing-out, quite simply, what the bond markets will have noticed.

Having said all that, the prospect of “haircuts”, however half-hearted, now looms over eurozone sovereign bond-holders, not least fragile European banks. So Thursday’s announcement also stressed that the €440bn (£386bn) euro European Financial Stability Facility would be “levered”, allowing it to borrow to make it bigger. This is supposed to allow the eurocrats to raise cash without having to trouble national parliaments, given that they’re likely to refuse.

The question of who will lend to the EFSF, on whose collateral, and who will ultimately repay the loans, was barely addressed last week. Such tricky questions will apparently be answered at the next European summit in December. Meanwhile, the fundamental disagreement between France and Germany regarding who should take the biggest losses – eurozone governments or private creditors – remains unresolved. Since Thursday’s announcement, though, Germany’s powerful constitutional court has issued an injunction requiring the country’s full Parliament to approve any EFSF bond-buying.

What is needed, urgently, is a clean, transparent Greek default – allowing this flailing semi-developed economy to leave the eurozone, re-establish a weaker drachma and regain its self-respect. Portugal should leave too, its membership of the same currency bloc as Germany is as absurd, and self-defeating, as that of Greece. There would be further market turmoil, yes, but a few more months of volatility, leading to an ultimately more stable outcome, is surely better than the current situation where the entire world is living in fear of a massive “euroquake”.

The eurocrats, of course, lack the guts to trim back monetary union to a more manageable size. Too much face would be lost. So “euroquake” fears, once viewed as outlandish, are gaining pace. Despite Thursday’s deal, and all the reassurances of a “durable solution”, the Italian government on Friday paid 6.06pc for 10-year money, up from just 5.86pc a month ago and a euro-era high. Such borrowing costs are disastrous, given that Rome must roll-over €300bn of its €1,900bn debt in 2012 alone. A default by Italy, the eurozone’s third-biggest economy, and the eighth-largest on earth, would make Lehman look like a picnic.

The eurozone must be consolidated. World leaders should similarly force European banks to disclose their losses, we all take the hit and then we move on. Instead, we are served-up, in ever more complex variants, the same “extend and pretend” non-solutions. It gives me no pleasure to write this, but I give this deal two weeks. – Telegraph