The truth is this: The world is destined for a one-world currency – one world rule. What that foreshadows is this: When this system of Satan’s is done away with, you that survive will have those things under the Righteous Rule of Christ Jesus and our Mother Israel. Satan will have his one try at making things work in a distorted mirrored reflection of what is soon to become a reality outside of his influence, because try as he might, no matter how diligent or hard he might, he will fail, and mankind cannot survive even itself without our Mother’s beneficial guidance. Don’t cling to what is destined to pass away. Look to the Kingdom of Christ Jesus. If you do, know that your desires – worldly desires – must change to reflect a new inheritance. “1 John 2:17 And the world with its lust is passing away, but the one who does God’s will remains forever.” What is the “lust”? It is for wealth, immoral sex, and a list of other things that are also contrary to what benefits your true existence that could be in harmony with our Mother’s Coming Divine Plan of the Ages and on into eternity. Will you be there – because the hourglass has almost emptied – or will you be a casualty of Satan’s dying world? —Archangel Michael 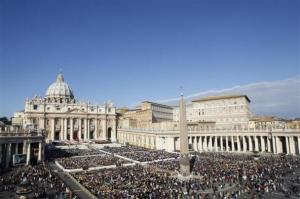 The Vatican called on Monday for the establishment of a “global public authority” and a “central world bank” to rule over financial institutions that have become outdated and often ineffective in dealing fairly with crises. The document from the Vatican’s Justice and Peace department should please the “Occupy Wall Street” demonstrators and similar movements around the world who have protested against the economic downturn.

“Towards Reforming the International Financial and Monetary Systems in the Context of a Global Public Authority,” was at times very specific, calling, for example, for taxation measures on financial transactions. “The economic and financial crisis which the world is going through calls everyone, individuals and peoples, to examine in depth the principles and the cultural and moral values at the basis of social coexistence,” it said.

It condemned what it called “the idolatry of the market” as well as a “neo-liberal thinking” that it said looked exclusively at technical solutions to economic problems. “In fact, the crisis has revealed behaviours like selfishness, collective greed and hoarding of goods on a great scale,” it said, adding that world economics needed an “ethic of solidarity” among rich and poor nations.

“If no solutions are found to the various forms of injustice, the negative effects that will follow on the social, political and economic level will be destined to create a climate of growing hostility and even violence, and ultimately undermine the very foundations of democratic institutions, even the ones considered most solid,” it said.

It called for the establishment of “a supranational authority” with worldwide scope and “universal jurisdiction” to guide economic policies and decisions.

Asked at a news conference if the document could become a manifesto for the movement of the “indignant ones”, who have criticised global economic policies, Cardinal Peter Turkson, head of the Vatican’s Justice and Peace department, said: “The people on Wall Street need to sit down and go through a process of discernment and see whether their role managing the finances of the world is actually serving the interests of humanity and the common good. “We are calling for all these bodies and organisations to sit down and do a little bit of re-thinking.” – Reuters