Psalm 94:20 “Can a corrupt throne— one that creates trouble by law— become Your ally?”

Countries, especially the USA, it creates laws that create trouble or problems for its subjects. They claim to be your ally and benefactor, but are in fact corrupt. Satan’s throne was corrupt from day one that he sinned. He carried over that corruption to his children of this old world, and they like him, Satan’s elite, they have an agenda to rule over all nations and to have mankind as their slave class. It has been tested by the banking system, and manipulated by the thieves of Wall Street. All are corrupt. 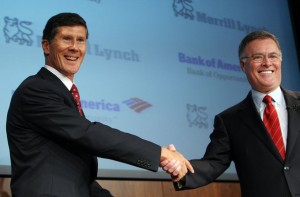 This story from Bloomberg just hit the wires this morning. Bank of America is shifting derivatives in its Merrill investment banking unit to its depository arm, which has access to the Fed discount window and is protected by the FDIC.

This means that the investment bank’s European derivatives exposure is now backstopped by U.S. taxpayers. Bank of America didn’t get regulatory approval to do this, they just did it at the request of frightened counterparties. Now the Fed and the FDIC are fighting as to whether this was sound. The Fed wants to “give relief” to the bank holding company, which is under heavy pressure.

This is a direct transfer of risk to the taxpayer done by the bank without approval by regulators and without public input. You will also read below that JP Morgan is apparently doing the same thing with $79 trillion of notional derivatives guaranteed by the FDIC and Federal Reserve.

What this means for you is that when Europe finally implodes and banks fail, U.S. taxpayers will hold the bag for trillions in CDS insurance contracts sold by Bank of America and JP Morgan. Even worse, the total exposure is unknown because Wall Street successfully lobbied during Dodd-Frank passage so that no central exchange would exist keeping track of net derivative exposure.

This is a recipe for Armageddon. Bernanke is absolutely insane. No wonder Geithner has been hopping all over Europe begging and cajoling leaders to put together a massive bailout of troubled banks. His worst nightmare is Eurozone bank defaults leading to the collapse of the large U.S. banks who have been happily selling default insurance on European banks since the crisis began. – The European Union Times

← Solar Flares 2012 : Is It The Sun’s Final Assault on Earth?
Gorbachov calls for “global governance” in response to Wall Street protests →