At the close of Armageddon, Yahweh will cleanse this planet – burst this planet with solar radiated heat and completely obliterate all carcasses and remove the footprint of Satan. Anything living that might escape our swords will be melted away, even if they have hidden beneath the earth’s crust.

The earth is to later be renewed by Yahweh. The remnant will be placed back upon this planet. A new creation will take place as the animal kingdom is replenished.

Everything will line up in the heavens for the coming events that are destined to take place. The SUN typifies the SON in relation to becoming center stage in the final conclusion of this old wicked world. 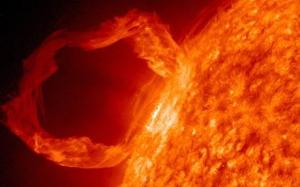 Solar Flares and 2012 are both hot topics among many people at the moment. Everyone wants to know if the Mayan Calendar, which predicts the end of the world as we know it on December 21, 2012, is accurate or not. Not to promote fear and panic, but it appears as though it could be.

NASA has been reporting for months that the solar flares of 2012 will be the worst that Earth has ever seen. A strong X class flare could easily wipe out all telecommunications across the us or globally for months or even years. Will this be something that we see in the next calendar year?

According to Richard Fisher, who is the director of the Heliophysics division at NASA, scientists need to learn more to protect all of Earth’s inhabitants from certain doom.

“Obviously, the sun is Earth’s life blood,” he said. “To mitigate possible public safety issues, it is vital that we better understand extreme space weather events caused by the sun’s activity.”

Those few words say a lot about how interested NASA is in the coming solar flares. Of course, they wouldn’t tell us if 2012 was in fact the end of the world for fear of creating mass panic. Can you imagine if they announced it? People would start looting, killing and not caring one bit about anyone or anything. It would be absolute chaos and many would die. So, it’s probably best to keep it a secret, even though it’s pretty obvious that something big is brewing for 2012 — and not just according to the Mayan Calendar.

Though the Mayan’s predicted something happening in 2012 thousands of years ago, NASA is also predicting something big themselves for the coming year.

“We’re entering Solar Cycle 24. For reasons not fully understood, CMEs in even-numbered solar cycles (like 24) tend to hit Earth with a leading edge that is magnetized north. Such a CME (coronal mass ejection) should open a breach and load the magnetosphere with plasma just before the storm gets underway. It’s the perfect sequence for a really big event,” said Jimmy Raeder, a NASA researcher.

With all of the hype of the Mayan Calendar and now NASA’s new information, do you believe the Earth will be hit by a massive solar flare in 2012? If so, are you ready to withstand the aftermath? – TechnologyGather.com