Could it happen? Time will tell. We’ve been warned to be prepared for the worst nature has to offer, not only from the sea and beneath this planet’s surface, but also from the unexpected that lies just ahead.

Jeremiah 15:8 “I made their widows more numerous than the sand of the seas. I brought against the mother of young men a destroyer at noon. I suddenly released on her agitation and terrors.” 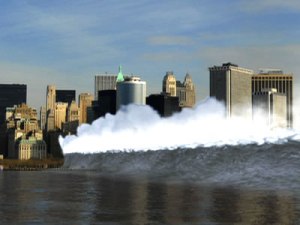 Here is an intelligence report of an imminent East Coast tsunami. Please scroll down to this radio broadcast of September, 30th, Hour 3, and listen to the first few minutes; then please return to the next paragraph below, for the rest of the tsunami story:
http://www.gcnlive.com/programs/nutrimedical/archives.php

Geologists agree that if the Cumbre Vieja volcano erupts, its resulting landslide will surely generate a tsunami that will kill many millions of people along the East Coast of the Americas, from Canada, down through the United States, the Caribbean Islands, and down through Central and South America. BBC-TV Documentary Clip: Geologists warn of East Coast Tsunami:

John Moore’s source from U.S. Northern Command, Denver, Colorado tells him that there is very frenzied activity there, including that of food storage. Recall that Pres. Obama was there
just a few days ago. It appears that he may be preparing to go underground in response to N.A.S.A.’s observations of comets and asteroids in an approaching bee swarm.