Recent UFO Sightings from Around the World

Update: The contingent force of LOZ assigned to defeat the EJCF (Eternity’s Joint Command Force) has been defeated. The EJCF has set up an base of operation in an old command post of the former Joint Command in the Pleiades’s region. Alpha Command has further reported the EJCF’s scouting of a planet like the earth in its former days of the pre-flood era. Intercepted communications among the invaders reveals they intend to attack and decimate the Azmon Barrier to free Satan and his demons for removal to that planet. All remaining LOZ are inside the Azmon Barrier and are concerned with the workings of the ongoing battles with Satan forces from within. Meantime, Alpha Command has beefed up the Azmon Barrier awaiting the coming assault. Yahweh’s Active Force has also been deployed around the barrier in hopes it will further deter a very well equipped and menacing enemy against Yahweh’s Crown of Authority. Although orphaned by Seraiah’s past action in Eternity, another God appears to have taken sides with them and is providing additional help and reanimation of their spent energies. That’s all I have for now.

This unidentified flying object was seen and recorded in the sky above Thunder Bay in Ontario, Canada on 27th September 2011 around 8:40 pm.
Witness report:
UFO sighting September 27th 2011, 8:40pm. Observed over a tree farm in Thunder Bay, Ontario Canada. Object estimated to be less than 1 Kilometre away. Object appeared in sky out of nowhere slowly moved to the right and then back to the left, hovered then began to come closer towards us. Started to run at the end of the video, saw object began to descend and lost sight after it went below tree line. No sound from object. Dark area on the horizon in the video is the tree line we are standing at the front left corner of a large field and the tree farm is a grid seperated by rows of trees. Object appeared in the Northwest.
Author (barriekicks @ youtube) 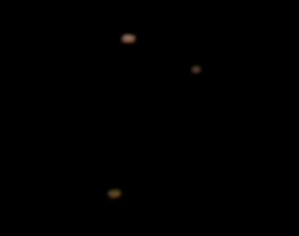 These unknown bright objects were filmed hovering in the sky over Vancouver in Washington on 1st October 2011.

Interesting video of huge objects flying slowly in the night sky over Cardiff in United Kingdom. This footage was filmed on 31st August 2011 around 9:30 pm.

Reports are flooding into MUFON from Lee’s Summit Missouri. Multiple eye witnesses state they saw not only UFO’s but in atleast onereport, helicopters which suggested possiblemilitary presence. Were these night skydivers or UFO’s?

This UFO was filmed hovering in the sky over Chillancito, Chile on Saturday, 1st October 2011 around 10 pm.

← How almost half of U.S. population lives in a household that receives state benefits
Hunger crisis grips North Korea as food runs short →

One thought on “Recent UFO Sightings from Around the World”