Tornado: It was raining stones

Mother brings the disasters against mankind as punishment, but Satan and his demons try to thwart earthquakes, tornadoes, hurricanes and all else that brings his empire that much closer to destruction. This is why the demons fight with the holy angels. Satan knows it would be suicide on his part to encourage evil acts even though he is guilty of starting the war, and because of that, he is held responsible for all that occurs even though he fights to hold things together and tries to maintain peace. Satan wants his empire to flourish, but Mother does not, because it is not part of Her Way, and Satan is not Her anointed King. 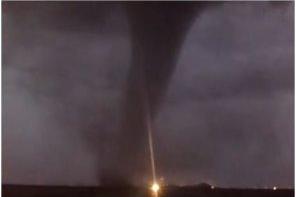 Johannesburg – Residents of Duduza outside Nigel on the East Rand have spoken about the devastation in their area after a tornado struck on Sunday evening.

“The Lord was merciful for taking only one child. You can build houses, but not lives,” said Solpha Mkhtshkwa, whose son Xolani, 8, died when a wall fell on top of him.

“I don’t know where I will sleep tonight. I don’t know what to do. I don’t know how I’m supposed to carry on, we had just finished building the house and moved in and now my child is dead,” she said as she sat on a chair in front of her ruined house.

Paramedics took her youngest son, Fanafuthi, 7, to be examined at a clinic on Monday afternoon after he was also hit on the head by a stone or piece of wood.

Ekurhuleni executive mayor Mondli Gungubele said the tornado hit at 17:29 and by 17:32 it was all over.

The tornado devastated an area about 200 metres wide and 2km long.

Trees were stripped bare in the veld with only the trunk and a few branches remaining.

“It rained stones, I sat in the rain all night, too scared they would steal my stuff,” said Charles Molefe, 52, on Monday. He had been in his living room watching TV when the tornado hit the area at about 17:30.

“The TV was blinking continuously and my wife went to look at what was happening outside. The next moment she was screaming and shouting about things flying through the air. It literally rained stones. Some of them fell on the roof. It was terrible.

“Sheets of corrugated iron flew through the air. The next moment there was the most terrible noise when the huge street light from across the road fell over and hit the house. I thought it was the end. After a few minutes it was dead quiet and then you just heard how everyone was screaming,” said Molefe.

He spent the rest of the night under the remaining corrugated iron sheets of his house, standing guard, while his wife Francina slept at the neighbours.

“At around 03:00 or 04:00 I found a group trying to steal my cement. Fortunately the police were here and they arrested the six and took them away,” he said.

By Monday afternoon it was estimated that 558 houses had been completely ruined or very seriously damaged and that 2 790 people had been directly affected. A total of 166 people were treated and taken to surrounding hospitals.

Police officials drove through the area on Monday afternoon, telling people over loudspeakers to go to the community centre to report homes that had been damaged or if they needed help.

Jeanie Pretorius said her domestic worker Lily Madonsela called her at about 04:00 on Monday morning to tell her her whole house had been wrecked.

“We decided to come fetch her, you can’t just leave her here. Her whole house is gone. She is friends with the woman whose child died and she also wants to help.

“When she called, I couldn’t really understand what she was talking about. She kept saying a ‘snake’ had come from the dam and wrecked the whole place. And that the snake went from the one dam to the other,” she said on Monday afternoon while she waited for Lily to gather her things to come and stay with them until she again had a place to stay in Duduza. – News24