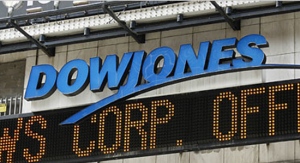 The Dow has fallen –677 points in two days. With no solution in sight for Europe and new fears of a global recession, investors dumped stocks and commodities and ran to the safety of U.S. Treasuries. Stocks came off their worst levels, but still finished sharply lower Thursday in heavy-volume trading as a gloomy outlook from the Federal Reserve in addition to ongoing economic jitters fueled concerns of a recession. Adding to concerns of another global recession, China’s manufacturing sector contracted for a third straight month in September. The world’s second-largest economy is especially vulnerable to fading demand from the U.S. and Europe, its biggest export markets.  In addition, business activity in France and Germany grew at its weakest pace in more than two years in September and new orders fell for a third month, underscoring a loss of momentum in Europe’s largest economies. –CNBC

The Garden of Eden. It represented something good that was to be expanded into a worldwide thriving community of people . Likewise, Satan’s aspiration to be like our Mother Yahweh encompassed Satan’s try at duplication the Sacred Garden in the form of the United States. It represented what he believed would turn out good for the entire world if overtaken by it in an expansive effort.

Satan’s desire for liberty and free will is what he envisioned for his own children. After many failures throughout mankind’s history, Satan inspired the United States and broke it away from the royalty of a nation (England) that was ruled with more stringent rules. This reflected his own break from the Royal Kingdom of Yahweh. Yet, Satan believes in Liberty and Justice for all, and inspired the words “In God We Trust” The god he was speaking of was not Yahweh, but himself, because he is the god of this system of things in this age he inspired by his fall from Yahweh’s Crown of Authority. Now Satan knows he stands to lose his prized child and the WAY of life he envisioned for this old world. Like the Garden of Eden that was lost in ancient times, Yahweh will not let Satan’s vision to make the world like the USA become a reality. Satan passed his power to his child so that they would be the strongest super power on earth and unbeatable. But Yahweh is slowly stripping his child of its wealth and its resources. Like the ancient Garden of Eden beneath the Atlantic ocean, the USA will itself sink – not into water, but into oblivion.

Do you want the USA to survive? If you do, you stand with Satan and his angels and converts that are fighting to keep it in existence. Will it become a hollow shell of what it once was, or will it regain its posture? Yahweh has declared that it will fall to its knees. Satan has countered that it will be at a cost to Yahweh that She has never conceived if his child should fall.