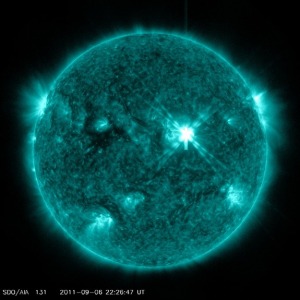 Just as many Americans got back to work after the long Labor Day weekend, the sun jolted to life as well, unleashing a massive solar flare just one day after another sun storm sent a stream of particles racing toward Earth.

The X-class solar flare — the most powerful type of sun storm— erupted at 6:12 p.m. EDT (2212 GMT) on Tuesday (Sept. 6) and hit its peak strength eight minutes later, according to a space weather update by the National Oceanic and Atmospheric Administration (NOAA). The flare occurred less than 24 hours after another less intense but still dramatic solar storm.

The Tuesday event registered as an X2.1-class solar flare, while Monday’s storm topped out at a still-powerful M5, NOAA officials said. Strong solar flares are classified according to a three-tiered system: X-class flares are the most powerful, M-class are of medium strength and C-class are the weakest.

Researchers are still taking the measure of the big Tuesday sun storm. It may also have produced a coronal mass ejection (CME) aimed at Earth, researchers said, but as of Tuesday evening it was too early to tell.

CMEs are massive clouds of solar plasma that can streak through space at up to 3 million mph (5 million kph). CMEs that hit Earth can wreak havoc on our planet, causing disruptions in GPS signals, radio communications and power grids. [Sun’s Wrath: Worst Solar Storms in History]

Monday’s event, which took place at 9:50 p.m. EDT (0150 GMT on Tuesday), did spawn a CME. It was a relatively slow one, traveling at less than 720,000 mph (1.2 million kph), NASA officials said. And even if this cloud of charged particles hits Earth in a few days’ time, it likely won’t cause much damage.

“This CME is not expected to cause significant geomagnetic storm activity, and further analysis is currently underway to better refine the CME timing and magnitude,” officials at NOAA’s Space Weather Prediction Center wrote in an update Tuesday.

The powerful storms unleashed on Monday and Tuesday aren’t isolated incidents. Solar activity has been ramping up over the last few months as the sun has roused itself from an extended quiescent phase in its 11-year activity cycle.

Just last month, for example, the sun let loose with an X6.9 solar flare, which was the most powerful solar storm since December 2006, NASA scientists said. That storm, which erupted Aug. 9, also generated a CME, but it was not aimed at Earth. Another powerful event, an X2.2-class flare, occurred on Feb. 15 of this year. Tuesday’s X2.1 was the third most powerful flare of 2011. – Space.com

James 4:8 “Draw near to God, and He will draw near to you. Cleanse your hands, sinners, and purify your hearts, double-minded people!”

Can you draw near before it’s to late? Yahweh is progressively revealing that She is the Source of what this world is presently experiencing in TRIBULATION. No one is here to force you to accept the TRUTH. That must come from within your own logic and be embedded within your heart, that Yahweh is dead serious about removing everyone and everything that has Satan’s footprint upon it. If you think that you are not under foot, then continue on with your belief. That is your right given to you by Yahweh as a freewill creation. But if you truly desire to walk in the light:

1 John 1:7 “But if we walk in the light as He Himself is in the light, we have fellowship with one another, and the blood of Jesus His Son cleanses us from all sin.”

Otherwise, you will be part of what is being cleansed away, because you remain in sin, and that is being removed from creation.