Some 450,000 Israelis march at massive ‘March of the Million’ rallies across country 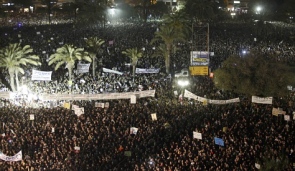 Over 450,000 protesters attended rallies across the country last night calling for social justice in what was the largest demonstration in Israeli history.

The main protest took place in Tel Aviv’s Kikar Hamedina, where some 300,000 people gathered after marching from Habima Square about two kilometers away. Protest leader Yonatan Levy said the atmosphere was like “a second Independence Day.”

Protest leaders Daphni Leef and National Student Union Chairman Itzik Shmuli both addressed the Tel Aviv crowd. “Mr. Prime Minister, the new Israelis have a dream and it is simple: to weave the story of our lives into Israel. We expect you to let us live in this country. The new Israelis will not give up. They demand change and will not stop until real solutions come,” Shmuli said.

“My generation always felt as though we were alone in this world, but now we feel the solidarity,” said Leef. “They tried to dismiss us as stupid children, and as extreme leftists,” but last night’s countrywide protest proved otherwise, she said.

Dr. Shiri Tannenbaum, a medical resident leading the young doctors’ protest against the recent collective wage agreement signed between the government and the Israel Medical Association, also spoke at the Tel Aviv rally.

In Jerusalem, an unprecedented 50,000 people filled Paris Square and the surrounding streets, almost twice the number that attended previous protests this summer.

Actress and comedienne Orna Banai told the crowd in the capital: “I am not amused that there are hungry children here; that we have a soldier rotting in captivity for five years; that Israel is one of the poorest examples there are of human rights.”

The chairman of the Hebrew University Student Union, Itai Gotler, said: “We changed this summer. The voice of the mother, the teacher, the student, have been heard…The fire of protest was lit in Tel Aviv, but the tent city in Jerusalem shows that the protest belongs to all of us.”

Gotler said the Jerusalem tent city was closing down, but pledged to continue the struggle.

Yehuda Alush, 52, from Be’er Sheva, among a group of protesters from the Negev who marched to the capital, said: “This protest must not stop or we’ll lose.” In Haifa, the protest drew 40,000 people, many of whom waved red flags.

The Haifa protest focused on the issue of discrimination against Arabs. Shahin Nasser, representative of the Wadi Nisnas protest tent in Haifa said: “Today we are changing the rules of the game. No more coexistence based on hummus and fava beans. What is happening here is true coexistence, when Arabs and Jews march together shoulder to shoulder calling for social justice and peace. We’ve had it. Bibi, go home. Steinitz, go and don’t come back, Atias, good-bye and good riddance,” he said, referring to the prime minister, the finance minister and the housing minister, respectively. – Haaretz.com

The nation of Israel, or those Promised?

Romans 9:8 “That is, it is not the children by physical descent who are God’s children, but the children of the promise are considered seed.”

What is “seed?” It is the new start of a whole future generation of mankind.

Israel is on its own, but the Spiritual Israelites, they are being fought for, even as I post this. The fight is for their deliverance, just as our Mother delivered those in ancient time out of Egyptian bondage.

So if you are forced to wear the sign of the beast, will that nullify you from being part of the seed, or will your mind remain on our Creator and Savior Christ, and like this old world, will those marks on your forehead or hand mean this to you?

Exodus 13:9 “Let it serve as a sign for you on your hand and as a reminder on your forehead, so that the law of the LORD may be in your mouth; for the LORD brought you out of Egypt with a strong hand.’”

Public declaration, or public denial of Christ and Yahweh is what separates good seeds from bad seeds. Remember that. Dying is not your first choice, because:

Psalm 115:17 It is not the dead who praise the LORD, nor any of those descending into the silence [of death].”

Keep praising our Mother no matter what is done to your vessel of flesh.