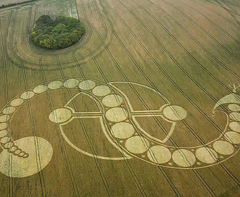 AFTER the crop circle has come the almost obligatory UFO sighting.

This spectacular formation appeared overnight on July 28 in a field at West Woodhay.
It immediately attracted hundreds of sightseers and simultaneously earned the ire of landowner Harry Henderson, who dismissed it as the work of trespassers.

But even those artists who lay claim to some of the designs that appear in the fields each year have seen strange lights associated with the formations.

Now Newbury businesswoman Bonni Southey has reported unexplained light phenomena after she decided to visit the area.
She said: “We were having a look to see if the crop circle was still there. Looking across to the horizon above and to the right of the crop circle formation we saw first one bright, static light, which then disappeared and re-appeared again about two miles away in a matter of seconds.

“It hovered there for a couple of minutes and a second light slowly appeared next to it, and then a third. We watched these for quite a while – about 15 minutes – and then decided to try and get closer to them, driving over towards Ashmansworth. We then lost them geographically, or they disappeared completely.”

Ms Southey, who runs Holistic Family Health in Newbury, added: “We couldn’t determine their shape but they looked elongated and had a twinkling appearance – definitely not stars, planes or helicopters. There was no noise, but they kept fading and then re-appearing, sometimes in the same place and at other times a distance from where they had faded.”

Those who oppose a purely mundane explanation for at least some of the designs point to intricate ‘weaving’ of the cereal; to bent but unbroken stalks even in brittle crops, to apparent changes at the cellular level and to the fact that in 1991 an intricate design appeared outside the then Prime Minister John Major’s country residence, despite the fact that the field is a maximum security zone patrolled 24-hours a day.

The West Woodhay formation, dubbed the cosmic serpent by enthusiasts, spans 11 tractor tram lines and is one of the largest ever seen in the UK.

Isaiah 28:17 “And I will make justice the measuring line and righteousness the mason’s level.” Hail will sweep away the false refuge, and water will flood your hiding place.”

Isaiah 34:11 “The desert owl and the hedgehog will possess it, and the great owl and the raven will dwell there. [The LORD] will stretch out a measuring line and a plumb line over her for [her] destruction and chaos.”