Is climate change making us crazy? 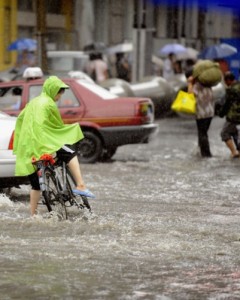 A new report warns that droughts and floods can fuel severe mental-health problems like anxiety, depression, and even suicide.

Scientists worldwide are forecasting severe drought, unprecedented flooding, and scorching heat waves as a result of climate change. One thing that’s often overlooked in these discussions, however, is the effect that climate change may have on our mental health. But researchers in Australia have just published a report, A Climate of Suffering: The Real Cost of Living with Inaction on Climate Change, that gives us some new clues. Here, a brief guide to this research:

How could climate change affect our sanity?
First, natural disasters like hurricanes and floods have a profound impact on individual suffering. As a result of these disasters, as many as one in five people could suffer from anxiety, depression, suicide, domestic violence, or substance abuse, say the report’s authors. Months after tropical cyclone Larry struck Australia in 2006, for example, more than one in 10 primary school children reported symptoms of post-traumatic stress disorder (PTSD). And in some rural Australian communities, the suicide rate has jumped by 8 percent since a massive drought took hold several years ago.

What other impacts are expected?
For years-long disasters, researchers have observed the long-term collapse of community solidarity. For instance, during and after events like the prolonged drought that has gripped Australia for more than a decade, there’s “a breakdown of social cohesion caused by loss of work and associated stability,” says Erik Jensen in the Sydney Morning Herald.

Who is most vulnerable to these problems?
Children are particularly susceptible to mental health issues like pre-disaster anxiety and post-traumatic stress disorder. And the long-term mental health effects of climate change are likely to be felt strongest inpoorer countries and in rural areas within industrialized nations, the study finds, since these places have the least access to mental health services.

Aren’t natural disasters like hurricanes and droughts normal?
Yes, but not with the intensity and frequency many areas of the world are now seeing. ”While cyclones, drought, bushfires [wildfires], and floods are all a normal part of Australian life, there is no doubt our climate is changing,” say the report’s authors. ”For instance, the intensity and frequency of bushfires is greater. This is a ‘new normal’, for which the past provides little guidance.” – The Week

Yes, the climate is changing – but it’s at the same time much more than just “climate change”, as many would hope and expect us to believe. Extreme weather has become the norm because we are currently in the Tribulation, and have been now for several years. And Yahweh, who is also Mother Nature, delivers Her messages via Her nature. We are a world under judgment – every nation on the planet – and Yahweh will continue to deliver Her wrath until the time Armageddon begins. Father is moving this world of people towards all out anarchy as the Wrath grows near for execution of His vengeance upon those that will be left behind in this world.

One thought on “Is climate change making us crazy?”