We’ve been telling you who was behind Hurricane Irene and why, and now we present you to you the evidence:

A group of UFO formations were spotted by couple of New Yorkers in New York city on August 26, 2011, just a day before the arrival of Hurricane Irene.   The formations change from triangle shapes to Space craft shapes.  Very interesting UFO sighting comparing with many other sightings reported lately.  Witnesses were not sure what those lights were, but suspecting it is UFO.

UFO was captured on NASA International Space Station (ISS) yesterday August 26, 2011. It appears to be right above the Hurricane Irene.  ISS was paying close attention to the Hurrincane Irene, this footage was caught accidentally. 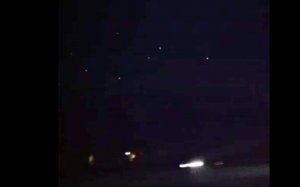 August 27, 2011
Zionsville IN, USA
Source: YouTube user jwcool33
Uploader’s Comment: While driving on August 26 at around 10:00 I looked in the air and saw a V shape pattern made up by 20 or so bright lights, when we passed we saw they were not stars and they begin to fly fly to the left of us. I pulled out my dads iphone and took some small video. The video you see is unedited.

Awesome footage taken by NASA Astronauts of a tube shaped UFO flying between the Space Station and Hurricane Irene on 8-26-2011.

Video by UFOKanali. I saw them in a previous video he put out of the Iss filming hurricane Irene and saw something sticking up off the horizon. Could also be plasma created by the HAARP. Because there are already HAARP rings showing up on radar.