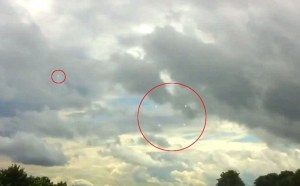 (Scroll Down for Video) A UFO has been filmed speeding across the sky over a motorway – close to where a BBC reporter spotted another mystery object just days later.

The clear footage shows a white ball of light darting through the air over the road which is close to Stansted Airport, Essex.

Several orbs appear to dart away from the central light in different directions across at high speed.

The video was filmed on the M11 on the Essex and Hertfordshire border close to where BBC Radio 5 Live sports journalist Mike Sewell told listeners he saw a disc-shaped aircraft.

The cameraman, who uploaded the footage onto YouTube, can be heard saying ‘Oh my God’ as the white balls of light dart across the sky.

However, critics were suggesting that the UFO can easily be explained – it is a hoax.

Nevertheless, the video, was uploaded on July 29 five days before the BBC reporter said he saw a similar mystery object.

The video was posted online by 36-year-old ‘alvinol’ on the southbound carriageway of the motorway.

BBC reporter Mr Sewell, 41, said he saw a bright light descending towards the ground as he returned to the Midlands in the early hours of the morning.

‘I was probably about 15 or 20 miles from Stansted at 4.15 in the morning and there was this big bright light in the sky descending towards the road,’ he told Radio 5.

‘It wasn’t an aeroplane, and it wasn’t a helicopter. Certainly of a kind of – and I dread saying this – disc shape. It had several lights flashing all around it.

‘It was not the shape of a normal aircraft it was a big disc, round-shaped craft and it didn’t leave.

‘I watched it for two or three minutes before I eventually lost sight of it. I decided to go back again through the village.

‘It’s a very quiet area and I’ve spoken to someone who knows it very well and they said there’s no military installations in that area so I would be intrigued to hear if anybody else saw it.’ – DailyMail

Yahweh’s elite warriors of the Lions of Zion (LOZ). Complete communication battery powered and satellite failures, and the loss of all power grids will be how they combat Satan’s latest plan to keep his prized child in tack. Sweltering heat and drowning will kill thousand upon thousands as the scorch / and flooding policy continues upon the earth and its population.

The LOZ is in preparation to knock out earth communication satellites. This latest chess move will also affect the weapon satellites that are not shielded in class 2 category. Those will remain in working order until the LOZ individually targets each one of them.

Non communication will throw the entire world of people into a panic mode.

Revelation 16:8, 9 “The Fourth Bowl
The fourth poured out his bowl on the sun. He was given the power to burn people with fire, and people were burned by the intense heat. So they blasphemed the name of God who had the power over these plagues, and they did not repent and give Him glory.”