“Bugnadoes” Develop Across Areas of Missouri 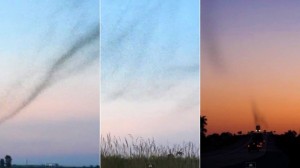 Parts of Missouri affected by serious flooding in recent months are having to contend with a bizarre new natural hazard, swarms of bugs that appear in the shape of tornado funnels.

The large bug vortexes of flying bugs, which have been referred to by local people as “bugnadoes”, have been spotted throughout low-lying parts of the State in the vicinity of the Missouri River.

It is unclear as of yet what species of flying insects is involved.

To make matters worse, however, swarms of dragonflies have been seen flying around and feeding on the swirling bug funnels. – MyWeatherTech.com

Christ revealed through insight that could only come from the One that knows the finale from the beginning, that pestilence would be one of the distinctive features of the end time signs among this generation of those now living as mortals within this fleshly plane, and would witness the coming Great Tribulation:

Matthew 24:3 and verse 21 “While He was sitting on the Mount of Olives, the disciples approached Him privately and said, “Tell us, when will these things happen? And what is the sign of Your coming and of the end of the age?” & “For at that time there will be great tribulation, the kind that hasn’t taken place from the beginning of the world until now and never will again!”

Christ is the Vindicator of his Father’s name that has not only been defamed by Satan and his demons and the Converts, but that of those living on the fleshly plane as well. For the wicked seed of Satan’s that is comprised of mankind made up of negative energy, Christ further warned:

Luke 21:10 “Then He told them: “Nation will be raised up against nation, and kingdom against kingdom. 11There will be violent earthquakes, and famines and plagues in various places, and there will be terrifying sights and great signs from heaven.”

← Solar Flare Activity Prompting NASA to Convene a News Briefing Thursday in Washington
Worries of Mega-Tsunami ! 720 Earthquakes On El Hierro In One Week →