The Downgrade of President Obama’s Presidency 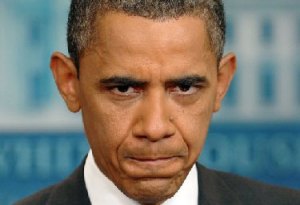 President Obama’s job approval was downgraded this week to an all-time low.

That shouldn’t be a surpise to anyone, given that all the news coverage this week has been a reaction to Standard & Poor’s first ever downgrade in the U.S. debt rating.

President Obama is the first President in history to preside over America’s credit downgrade.

The word downgrade itself has become symbolic of the towering hopes that America and the world had when President Obama was first elected President.

The Der Spiegel magazine printed an article on August 9, 2011 titled, “How President Obama Disappointed the World,” in which they comment: “All that remains of the great hopes Americans and the world had pinned on Obama, inspired by his stirring campaign speeches about change and renewal, is a battlefield of unsatisfactory and contradictory compromises. Obama, who just turned 50 and was once a symbol of youthful change, suddenly seems old and worn out, as gray as his hair has become.”

In the same way that the “subprime mortgage crisis” became the proverbial phrase that symbolized everything wrong during America’s financial meltdown during Obama’s first months in office, the word “downgrade”  has become the inglorious verb that smashed the hopes and dreams of not just the American people, but indeed the world. Is “downgrade” the term that represents the zeitgeist of Obama’s troubled presidency?

In yet another article, titled “Obama’s Weakness is a Problem for the Global Economy, Der Spiegel referred to Obama as, “The Indecisive President,” adding that, “a new financial crisis has gripped the US, Asia and Europe, but Barack Obama can only respond with catchphrases. The United States will remain a ‘triple-A country,’ the US president insisted Monday, as stock markets crashed. The most powerful man in the world seems strangely paralyzed.”

Downgrade is an accurate euphemism for the lowering of all sorts of expectations for people and things from their previously lofty status. Bloomberg reported today that, “[c]onfidence among U.S. consumers plunged in August to the lowest level since May 1980, adding to concern that weak employment gains and volatility in the stock market will prompt households to retrench.” – Technorati

Exodus 7:3 “But I will harden Pharaoh‘s heart and multiply My signs and wonders in the land of Egypt.” Obama’s heart is like that of the ancient Egyptian Pharaoh. Yahweh is directing him in his actions to bring down Satan’s child by motivating his heart. Nothing you do will change the outcome. The United States is destined to fall. Clinging to the USA is the equivalent of clinging to Satan’s world, and not looking to Christ’s kingdom that is just ahead. You must choose which it is you really want. If it’s Christ’s kingdom, then let Yahweh do Her work without hindrance.