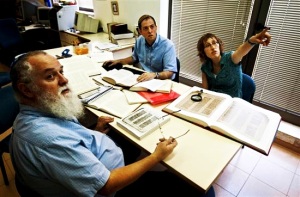 JERUSALEM – A dull-looking chart projected on the wall of a university office in Jerusalem displayed a revelation that would startle many readers of the Old Testament: The sacred text that people revered in the past was not the same one we study today.

An ancient version of one book has an extra phrase. Another appears to have been revised to retroactively insert a prophecy after the events happened.

Scholars in this out-of-the-way corner of the Hebrew University campus have been quietly at work for 53 years on one of the most ambitious projects attempted in biblical studies — publishing the authoritative edition of the Old Testament, also known as the Hebrew Bible, and tracking every single evolution of the text over centuries and millennia.

And it has evolved, despite deeply held beliefs to the contrary.

For many Jews and Christians, religion dictates that the words of the Bible in the original Hebrew are divine, unaltered and unalterable.

For Orthodox Jews, the accuracy is considered so inviolable that if a synagogue’s Torah scroll is found to have a minute error in a single letter, the entire scroll is unusable.

But the ongoing work of the academic detectives of the Bible Project, as their undertaking is known, shows that this text at the root of Judaism, Christianity and Islam was somewhat fluid for long periods of its history, and that its transmission through the ages was messier and more human than most of us imagine. – Story Continued at MSNBC.com

The Truth is elusive to those unworthy of the Kingdom. Satan twists and darkens out the light of Salvation to those blinded by self righteousness. Many are denying the power of the Father by saying it’s not necessary for the Father to give anything more than is already in the Word. Lean on your own understanding, and you lean towards the pit of eternal destruction. Truth on the writing of The Word can be found HERE.