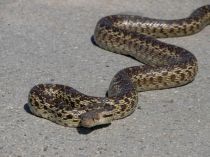 With the region already suffering through the Biblical plagues of drought and heat, you could have seen this one coming.

Snake experts tell 1200 WOAI news that late August and September will see an explosion of snakes in back yards, as the critters start slithering out looking for something to eat.

“They’re very hungry right now,” central Texas snake expert Jerry Cates tells 1200 WOAI news, in a statement which is creepy on it’s surface.  “The hungrier they get, the more they start ranging the fields looking for food.”

He says that’s why we can expect snakes to show up in places where they are seldom seen. – KJ.97.com

Yahweh is directing the animal kingdom – as they begin to starve – towards humankind as a food source. Those once preyed upon will become the predator. Fear of mankind will be lifted from their instinct and survival will become their driving force.

The pet dogs being abandoned, they will become more fierce than a pack of wolves. Soon, it will be dangerous out doors even in cities where they pack for survival. Humans will become their targets as a plentiful food source as cattle and horses and other livestock perish from the harsh conditions Yahweh is brining upon this planet.

2 thoughts on “Major snake infestation expected in Texas this month”