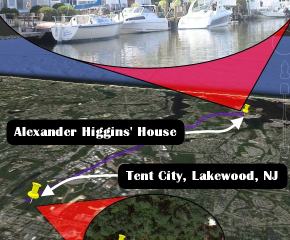 CNN reports on staggering 46 million people living on food stamps while homeless “Tent City” camps are popping up across the nation including one right near my own house.

CNN reviews the staggering number of Americans on food stamps. The video explains how those in poverty that rely on the government program are helpless to attain non-edible necessities which are not covered.

While 46 million people are on food stamps another sign of rampant poverty is the outbreak of homeless people making new homes in makeshift shelters in forests around the nation.

These villages of destitute people are often given the name “Tent City”. Recently, Tent City In Lakewood, NJ  was covered in the UK’s Daily Mail news paper.

The sad thing is most people go about their daily lives not even knowing this happening. Tens of thousands of people shop in the Brick shopping plaza on a daily basis oblivious to the struggles and plights of their fellow Americans about one mile away.

Even sadder is instead of helping these people out, NJ has fought all the way to the supreme court to force these people to leave this location.

The government, in fact, has been fighting for 4 years to force these people to be removed. – Alexander Higgins Blog

No money is available to combat the monetary losses that will be felt as the damage will be staggering to the world economy. The one world currency will soon come into reality, and shortages of food and other items of rationing will require that anyone whom purchases them must have complied with the world government’s mandate so that no one can steal someone else identity and purchase additional items so as to hoard or black market them. Enters the new age of Satan’s mark of the beast. 666 representing the number of a man, being in alignment with Satan as the new ruling authority over all of mankind. Computer chips will be implanted, or Satan’s law will dictate that those refusing must be eliminated. (Click here to read TRUTH about the Mark of the Beast)

Category : Signs in Evil Humanity, Signs in Food Shortages, Signs in Global Monetary Collapse, Signs in Government, Signs in the Economy, Signs in The Mark of The Beast
Tags : End TImes, Food Stamps, Homelessness, Mark of the Beast, Unemployment