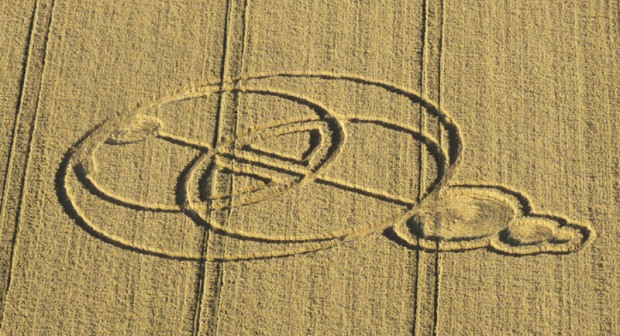 Do you all know why crop circle patterned signs are found in wheat fields, barley and corn, linseed, soy, rapeseed and rye? Because from all these crops comes chaff when separated. And because the signs in these fields are meant to convey an important group of messages within any given pattern, they again reveal Father’s Word and intelligence coming into the equation.

Chaff’s meaning: “chaff1 >noun 1 the husks of grain or other seed separated by winnowing or threshing. 2 chopped hay and straw used as fodder.

-PHRASES separate (or sort) the wheat from the chaff distinguish valuable people or things from worthless ones.
-ORIGIN Old English.”

In relation to the Word:

Psalm 1:4 “The wicked are not like this; instead, they are like chaff that the wind blows away.”

Isaiah 17:13 “The nations rage like the raging of many waters. He rebukes them, and they flee far away, driven before the wind like chaff on the hills and like dead thistles before a gale.”

Isaiah 33:11 “You will conceive chaff; you will give birth to stubble. Your breath is fire that will consume you.”

Isaiah 41:15 “See, I will make you into a sharp threshing board, new, with many teeth. You will thresh mountains and pulverize [them], and make hills like chaff.”

Jeremiah 13:24 “I will scatter you like drifting chaff before the desert wind.”

Daniel 2:35 “Then the iron, the fired clay, the bronze, the silver, and the gold were shattered and became like chaff from the summer threshing floors. The wind carried them away, and not a trace of them could be found. But the stone that struck the statue became a great mountain and filled the whole earth.”

Matthew 3:12 “His winnowing shovel is in His hand, and He will clear His threshing floor and gather His wheat into the barn. But the chaff He will burn up with fire that never goes out.”

Luke 3:17 “His winnowing shovel is in His hand to clear His threshing floor and gather the wheat into His barn, but the chaff He will burn up with a fire that never goes out.”