Animal Attacks on the Rise 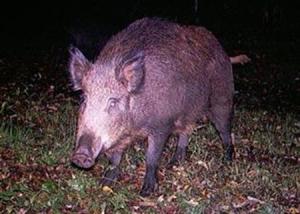 The feral swine are a non-native species suspected of escaping from game farms. As many as a couple of hundred are roaming the state, said Paul Curtis, a natural resources professor at Cornell University in Ithaca.

While an exact picture of the wild boar population in New York State is unclear, a report from the U.S. Department of Agriculture (USDA) said the swine were successfully breeding in the three counties and producing litters averaging four to six piglets.

“We’ve shot probably 15 to 20 of them in the last three years,” said Peter Andersen, a farmer in Long Eddy in Sullivan County.

Armed with a $230,000 grant from the Invasive Species Council of New York, the USDA last year sought to control the growing wild boar problem.

According to a USDA report, 27 of the animals were trapped or shot and tested for diseases.

“In the absence of aggressive professional management, these populations will likely continue their expansion and become entrenched in New York State with potentially devastating consequences to natural resources, agriculture, and human health and safety,” according to the report.

There have been no reports of feral swine attacks on humans but the animals can be aggressive, experts said.

A bloody, stinking sheep’s carcass greets shepherd Yves Vignon as he walks to check on his flock on the foggy Alpine heights. It’s the 17th of his ewes to be savaged in a month. The mountains over Grenoble were once an ideal grazing ground for his 900 sheep. But now, after long banishment, the wolves are back – bolder and hungrier than ever. “We came to this spot on June 24. A week later we were attacked” by wolves, Vignon, 62, said. It was the first of at least four attacks over the past month. “Every morning when I get up, I wonder what I am going to find on the spot where the sheep have spent the night,” he says. “I’m not here to feed those wolves!” Wolves were eradicated in France in the 1930s, but made a comeback in the southern Alps in 1992, crossing from Italy. They have spread through eastern France, first to the Savoy and this year to the Vosges and Doubs regions. The predators have also appeared in the Pyrenees and in the heart of France in the Massif Central mountain range, but the government says these far-flung wolves also originate from the Italian pack. Regional authorities estimate the French wolf population at between 170 and 200 this year, up from 140 to 170 last year. The government says wolves killed 1329 animals, mostly sheep, in France this year up to July 22. “We are beginning to wonder if there is a type of wolf that has no fear … since humans are not doing anything to them,” says Pascal Grosjean, a French government wolf expert. One such pack of fearless wolves swooped on a flock in broad daylight under the noses of two shepherds and five sheep dogs in the Alps in November 2010, Grosjean said. – Extinction Protocol

Fear of a rabies outbreak in Cumberland County has prompted Animal Control officials to take “extraordinary measures” to catch and kill dozens of feral pack dogs that have been attacking pets and wildlife with increasing regularity.

Animal Control has hired a Fayetteville company to help trap or kill what officials hope will be 60 dogs in the next month. Officials said they want to prevent an “imminent public health hazard” if rabies spreads through the estimated 10 packs of dogs running wild throughout the city.

Animal Control Director Dr. John Lauby said concerns about rabies grew more severe this week with reports of pack dogs attacking a fox and two raccoons in the Raeford Road area near Perdue Drive and Forsythe Street and in the 300 block of Abbottswood Drive off Ramsey Street. – FayObserver

An alpaca had to be euthanased while a sheep and goat were mauled during two distressing attacks by dogs in Bulli at the weekend.

Hobby farm owner Lisa Woodhouse said she was alerted by neighbours shortly after 8.30am on Saturday that two dogs, one described as dingo in appearance, the other a Staffordshire cross, were attacking her animals.

“A neighbour had to use a golf club to try and beat the dogs off my alpaca,” she said.

“He finally got them off and then they went for the sheep.

“Then another neighbour heard the commotion and tried to help.”

Ms Woodhouse said by the time she reached the scene, the animals were severely mauled.

A vet was called to the property and a decision was made to euthanase the alpaca.

“He was really stressed and had terrible facial injuries; the nasal cavity was pushed in.”

The sheep, which was attacked about the neck and tail, is in a precarious state.

No sooner had police arrived than they were called to a neighbouring property in George Ave where two dogs had reportedly attacked a goat.

Pet owner Marina Scozza said the dogs, both described as dingo in appearance, had jumped her fence about 7.30am.

“I saw the dogs and they were just crazy, a really serious concern,” she said. – illawarramercury

On Thursday, the City Council rewrote local gun laws so private contractors can use firearms against the four-legged fugitives.

Before, only police officers were authorized to fire guns in town.

The new law follows reports of a dog owner being dragged and injured as she hung onto the leash of her Yorkie while coyotes grabbed and gobbled the pet.

“We now have multiple incidents of coyotes attacking dogs on leashes during the day,” City Manager Leslie Keane said.

In the past, city officials have relied on traps, snares, pepper spray and tranquilizer guns to combat coyotes.

METRO VANCOUVER — More concerns are being raised after another vicious raccoon attack on a cat in Richmond was reported on the weekend.

All of the incidents — most of which have resulted in family pets being attacked, dragged away and bodies never to be recovered — have happened in the last few weeks and are concentrated in the south-west corner of the city, close to the west dyke.

Wildlife experts in B.C. have said fights between the two species do happen from time to time, but that instances of raccoons hunting and attacking cats are rare.

But the latest owner to contact the News, Karen Reynolds, isn’t convinced after seeing her cat, Coco, cornered and mauled by a pack of raccoons.

Reynolds, who lives on 7th Avenue in Steveston, was woken up at 2 a.m. Sunday by the sound of Coco the cat screaming.

“I heard all this noise out my backyard and when I went downstairs, I could see Coco was fighting off four raccoons over the other side of my neighbour’s fence,” said Reynolds.

“I was concerned about going outside when I seen the raccoons, but they were attacking my cat, so I had to do something.

“One of them backed off slightly and I managed to open the door long enough for (Coco) to get inside. I managed to rescue her but her injuries are unbelievable.”

Coco is in Richmond Animal Hospital recovering from multiple puncture wounds, scratches and bruising all over her body, face and ears and a dislocated tail. – The Vancouver Sun

Reported by our Ministry May, 2011: Soon, Yahweh will be directing the animal kingdom – as they begin to starve – towards humankind as a food source. Those once preyed upon will become the predator. Fear of mankind will be lifted from their instinct and survival will become their driving force.

← UFOs in the USA: Proof is on the News
Crop Circles Gaining Notoriety – Scientists Search for Answers →