“America Will Lose Its Sovereignty” 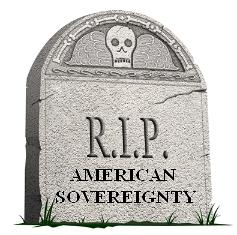 Reported by our Ministry in January, 2011: The United States mirrors Satan’s own rebellion with our Mother Yahweh. Satan broke away from a kingdom ruled by Royalty. 13 States represented the imperfection that was the number of Satan’s own imperfect start to try and lay a new foundation in creation that was not consistent with the Plan Yahweh has instituted at the beginning of Michael’s works. The United States sought to become a State unto itself. All countries are States. The mixture of territories taken in by the USA is why it is called the United States. This reflects Satan’s world empire of all combined counties that make up the statehood or empirical foundation he has laid within this world of his design. The breakaway from the Royal Realm’s control. and his quest to regain more power after having been stripped of much of his past abilities through the deliverance to mankind of knowledge that has molded and shaped the United States into the world’s dominating power is just a part of what is revealed in the mirror effect of his chosen Country, and that of his lessor children that make up the other Countries within his own family of misguided followers. The United Nations, though imperfect, reflects Satan’s copying of the Seraphic Order that is at the top of the list and is used to keep creations in subjection to Yahweh by following governed law. Satan uses his proxy as a threat to rogue nations that do not follow established protocol. When necessary, he uses his other pawns to bring punishment to bear against those that resist his guidelines laid out for trying to keep his family in harmony. The USA serving as his guidepost for what he would like the world of other governments to resemble, is why the USA tries to impose its “rights” and “laws” upon other nations that do not act in accordance of what is expected. When counties lose wars to Satan’s prototype, and they are reorganized, such as Japan and Germany, Satan models them closely to his own brand of or “way” of life that reflects his prized child – the USA. Since Satan’s demons serve as princes over his different kingdom States, they are expected to try and help bring them into harmony with his prototype. But Yahweh will not permit harmony, and this is why the variations of beliefs and ruler-ships exist within Satan’s kingdom. Yahweh will permit no successful foundation to rule except that of Christ Jesus. Since Satan will not give way to that truth, Yahweh knows that eventually they all must be crushed and put asunder.

One thought on ““America Will Lose Its Sovereignty””