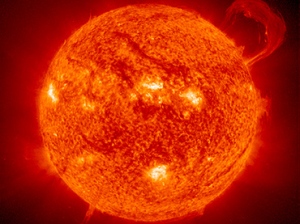 Some scientists believe bursts of solar activity cause natural disasters on our planet, but until now the star has been too difficult to reach or explore in any detail. Some Russian researchers think they have the solution.

­Volcanic eruptions, earthquakes, tsunamis – apocalyptic pictures are becoming an ordinary part of news bulletins across the globe. And scientists are not giving out reassuring forecasts.

“Unfortunately, we’re expecting more severe cataclysms which may lead to large-scale human losses and destruction,” says Baku-based Professor Elchin Kakhalilov of the Global Network for the Forecasting of Earthquakes. “I’m talking about even a possible shift of the centers of our entire civilization.”

The change in the Earth’s seismic activity coincides with the rise of activity on the sun. Scientists have been witnessing gigantic bursts of plasma on its surface and say they are affecting our planet, even though it is over 90 million miles away.

Each burst sends billions of particles into space which impacts the Earth’s magnetic field. This may trigger some of the processes going on deep bellow its surface, leading to earthquakes and volcanic eruptions.

The sun is currently monitored either by stations on Earth or in orbit. But sending a probe four times closer to the star would be far more helpful. And it may not be science fiction much longer, thanks to a project currently being developed by the Russian Academy of Sciences (RAS).

“This is going to be like a thermometer which would fly close to the Sun, measure its temperature, density and magnetic fields,” Dr. Sergey Bogachaev, an Interheliozond engineer from Moscow. “We’re making it from scratch: no one has ever done this before.” – RT

Michael’s own arms were made agile by our Mighty Father and Mother, Yahweh, during the creation process brought forth from within Father. Inside of Father, Michael initiated what scientists refer to as the “Big Bang.” This was the beginning of creation from a single Rock of Perfection – that being Father’s raw energy stored up in the form of a large rock. Until Michael exploded that rock of perfected energy, Father was solid within.

From that point on Father took on the creation of an expanse comprised of universes as Her internal body took on appropriate shape and form to sustain the new creation.

In Michael’s situation, the place near Father was from within. The Rock was Father that Michael stood upon to deliver the blow that brought forth his creative works.

Deuteronomy 32:4 “The Rock—His work is perfect; all His ways are entirely just. A faithful God, without prejudice, He is righteous and true.”

This, is a partial explanation of how Father and Mother Yahweh IS nature and how Father USES nature as Her arsenal in bringing judgment against mankind, and just as the heat from the sun causes calamities upon the earth, so does Her judgment bring wrath in the form of natural disasters.