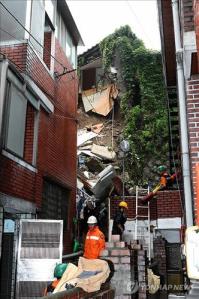 SEOUL, July 29 (Yonhap) — This week’s torrential downpours have left 59 people dead and 10 others missing across the country, with thousands more fleeing their homes to escape flooding and landslides, the country’s disaster management agency said Friday.

The heaviest rains in a century killed 18 people in Seoul on Wednesday as landslides swept through houses, roads and apartment buildings, while one person still remains unaccounted for, according to the agency.

In Chuncheon, some 85 kilometers east of Seoul, 13 people were also killed on Wednesday when a landslide engulfed a lodging house, while in the northern border city of Paju, another landslide swept over a factory, killing three and leaving one missing.

More casualties were reported across the capital area, including in the satellite cities of Gwacheon and Yongin, the agency said.

The downpours have also forced some 12,000 people to flee their homes and caused blackouts in nearly 130,000 homes across the country. More than 10,000 houses, some 1,100 factories and shops, and 978 hectares of farmland were submerged under water.

The total amount of rainfall in Seoul between Tuesday and 5 a.m. Friday was a record 591 millimeters. – YonhapNews

Look to the skies and the waters and the new curse being brought upon this planet as he brings calamity in revoking Yahweh’s previous commandment concerning this:

Mankind has proved itself to be in Satan’s image. Mankind has been revoked of any rule over the animal kingdom as Seraiah brings devastation to the wildlife as a preview of what mankind can expect to rain down upon itself and surface from the depths of a poisoned planet. The rain of dead fowl and sea life coming to the surface will reveal the stagnation of mankind’s own future fate. The curse coupled with plague is ever widening on this planet. Look beyond Arkansas children. Remain steadfast in your faith. Only a remnant will survive what has come in upon this planet.