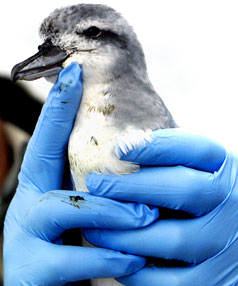 Countless thousands of prions have died in a phenomenon the Department of Conservation is calling a “seabird wreck.”

DOC is caring for more than a hundred weak and weary seabirds at its New Plymouth headquarters but thousands more were found washed up dead on Taranaki beaches.

Marine supervisor Bryan Williams said DOC was inundated with the disoriented and distressed birds, which are being kept in cardboard boxes, on Wednesday.