Return of the gold standard as world order unravels 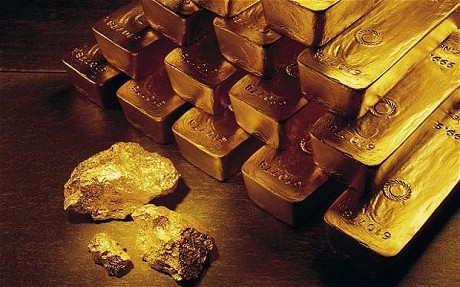 As the twin pillars of international monetary system threaten to come tumbling down in unison, gold has reclaimed its ancient status as the anchor of stability. The spot price surged to an all-time high of $1,594 an ounce in London, lifting silver to $39 in its train. On one side of the Atlantic, the eurozone debt crisis has spread to the countries that may be too big to save – Spain and Italy – though RBS thinks a €3.5 trillion rescue fund would ensure survival of Europe’s currency union. On the other side, the recovery has sputtered out and the printing presses are being oiled again. Brinkmanship between the Congress and the White House over the US debt ceiling has compelled Moody’s to warn of a “very small but rising risk” that the world’s paramount power may default within two weeks. “The unthinkable is now thinkable,” said Ross Norman, director of thebulliondesk.com.  Fed chair Ben Bernanke confessed to Congress that growth has failed to gain traction. “Deflationary risks might re-emerge, implying a need for additional policy support,” he said. The bar to QE3 – yet more bond purchases – is even lower than markets had thought. The new intake of hard-money men on the voting committee has not shifted Fed thinking, despite global anger at dollar debasement under QE2. Fuelling the blaze, the emerging powers of Asia are almost all running uber-loose monetary policies. Most have negative real interest rates that push citizens out of bank accounts and into gold, or property. China is an arch-inflater. Prices are rising at 6.4pc, yet the one-year deposit rate is just 3.5pc. India’s central bank is far behind the curve. It is very scary: the flight to gold is accelerating at a faster and faster speed,” said Peter Hambro, chairman of Britain’s biggest pure gold listing Petropavlovsk. “One of the big US banks texted me today to say that if QE3 actually happens, we could see gold at $5,000 and silver at $1,000. I feel terribly sorry for anybody on fixed incomes tied to a fiat currency because they are not going to be able to buy things with that paper money.” China, Russia, Brazil, India, the Mid-East petro-powers have diversified their $7 trillion reserves into Euros over the last decade to limit dollar exposure. As Europe’s monetary union itself faces an existential crisis, there is no other safe-haven currency able to absorb the flows. The Swiss franc, Canada’s loonie, the Aussie, and Korea’s won are too small.

“They will throw their silver into the streets, and their gold will seem like something filthy. Their silver and gold will be unable to save them in the day of the Lord’s wrath. They will not satisfy their appetites or fill their stomachs, for these were the stumbling blocks that brought about their iniquity.” Ezekiel 7:19 (HCSB)

“Their silver and their gold will not be able to rescue them on the day of the Lord’s wrath. The whole earth will be consumed by the fire of His jealousy. For He will make a complete, yes, a horrifying end of all the inhabitants of the earth.” Zephaniah 1:18 (HCSB)

← POTUS: ‘This May Bring Down My Presidency, But I Will Not Yield on This’
Tectonic plate tension increasing for the potential of another large quake →