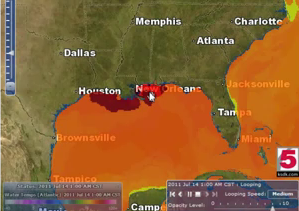 A search of latest News on Google also found:

Under a new plan to better understand the evolution of the Gulf of Mexico’s dead zone, researchers will now conduct three extensive cruises a summer, in June, July and August, instead of just one.

The team found two other distinct dead zones: one near the Barataria and Terrebonne region off the Louisiana coast, the second one  south of Marsh Island (also Louisiana).  They found no hypoxia in the 10 stations visited east of the Mississippi delta.

Dead zones are areas of this hypoxic water in which fish, shrimp and crabs are stressed and can sometimes die due to oxygen starvation. They are caused by excess streamflows that carry excess nutrients, particularly nitrogen and phosphorus, into the Gulf. These nutrients create large algae blooms which, upon decomposition, suck oxygen out of the water.

DiMarco’s was the first comprehensive cruise of the northern Gulf of Mexico to be conducted in June. A Louisiana-based group led by Nancy Rabalais has cruised the Gulf nearly every July since the mid-1980s. Dead zones are believed to peak in late July.

DiMarco’s cruise found a dead zone that measured 3,260 square miles. Earlier this year Rabelais and colleagues predicted this year’s dead zone will be the largest ever, reaching a maximum extent of about 9,400 square miles.

So does the area DiMarco found mean the dead zone will nearly triple during the next month? Or might the prediction be off? “We have no way of knowing,” he said.

Survey explores health of fish in Gulf of Mexico

ST. PETERSBURG — They’ve all heard the rumors: Sick fish, some with lesions, others with discoloration or deformities, have been pulled from the Gulf of Mexico.

Earlier this year, anglers caught red and vermilion snapper with wounds straight through their muscle tissue. Now there’s talk of grouper and mahimahi in a similar state.

But fishermen and scientists concerned about the health of fish in nearby waters are tired of rumors. They want facts.

Last week, a group of commercial fishermen and marine scientists set out to find the truth.

“We need to know whether there’s a problem going on with the fish or not,” said Bob Spaeth, a Madeira Beach fisherman and spokesman for the commercial fishing industry. “What we really fear is if there’s not a problem with the fish and people perceive that there is problem, then fishermen are going to have a problem marketing their fish, which could collapse the market.”

Lionfish are swimming into Southwest Florida. They are an invasive species with no known natural predators in the Gulf of Mexico. We found out what the lionfish invasion could mean for our fragile eco-system.

A subsurface predator called the lionfish is creeping closer to the shores of Southwest Florida.

Scientist Joy Hazell has been monitoring the growing numbers. She says lionfish are native to the Indian and Pacific oceans.

They where introduced into Florida by people who owned them as pets and dumped them.

Yahweh destroyed that oil rig in the Gulf. The plan behind the destruction was to correct the time line of events that were lagging. Yahweh is bringing to birth Her prophecy that everything died in the sea. This is just one more nail in the coffin that will bring about the desired result. The destruction of one single ecology like is happening in the Gulf at present will have a domino effect on the rest of the fragile lifeforms that exist in the food chain in the sea. As one sea dies so shall another. We have already seen the effects, like those reported on above, and will continue to.

← Radioactive Leak at South Carolina Nuclear Plant Being Investigated
POTUS: ‘This May Bring Down My Presidency, But I Will Not Yield on This’ →