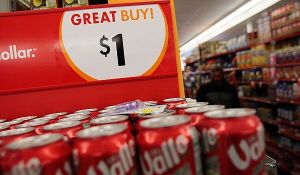 More stores across the U.S. that offer deeply-discounted products are seeing their sales decline after years of growth amid America’s “Great Recession” — and one analyst said on Monday it’s another sign of even deeper downturn.

While the demand at stores like the 99-Cent Store or Dollar Tree is still relatively high, the biggest chains in the nation have fallen short of Wall Street’s expectations for several months, a trend that may prove even more ominous for the economy at large.

“I think what’s going on in those stores is that we are in a depression for 80 percent of Americans,” top retail analyst Howard Davidowitz told KNX 1070.

Davidowitz pointed to the weakness of the dollar and a gloomy consumer outlook as some of the factors behind the stores’ slump.

“In other words, the economy is continuing to be worse, the Obama depression continues to explode,” he added.

Mark 13:19 For those will be days of tribulation, the kind that hasn’t been from the beginning of the world, which God created, until now and never will be again!