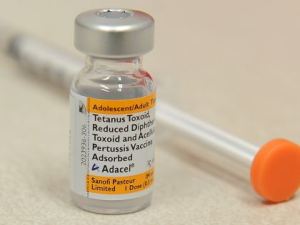 SMITHTOWN, N.Y. (CBSNewYork) — A cluster of whooping cough is growing on Long Island, with dozens of people infected by the virus.

As CBS 2’s Hazel Sanchez reports, a warning was sent out as children begin to head to summer camp – a certain breeding ground for the illness.

Parents in Smithtown are on high alert, as the highly contagious whooping cough is spreading through their community.

“It’s one of those diseases you don’t think you’ll ever hear about again,” parent Rick Vollkommer said.

Donna Wilson said she’s not taking any chances with her daughter, Kayla.

“She has been coughing a little bit here and there, so I’m contemplating maybe taking her to the doctor tomorrow, just to do a quick test,” she said. At least 40 people in Suffolk County, mostly children, have been diagnosed with Pertussis, the virus more commonly known as whooping cough.

Father believes in giving positive proof of Her existence, Her warnings to follow Her with fear if you do not understand the love of truth that She expects, and She gives a sign for those that view Her past conduct so that they might turn to Her for salvation through Christ Jesus or expect the same treatment.

Deuteronomy 32:24 “They will be weak from hunger, ravaged by pestilence and bitter plague; I will unleash on them wild beasts with fangs, as well as venomous snakes that slither in the dust.”

For the resisters, no food, the ravage of pestilence, and almost always associated with a plague to get their attention “venomous snakes that slither in the dust” are due justice for those that follow the Serpent’s lead, and “wild beasts with fangs” are just part of the terror one can expect for being a resister.

← 25 dead, 15 missing from flash flood in the Philippines
Underwater landslide likely cause of ‘mild tsunami’ →