25 dead, 15 missing from flash flood in the Philippines 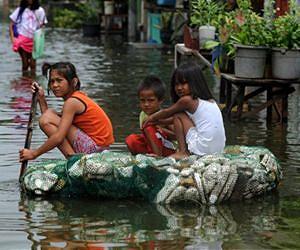 June 30, 2011 – MANILA – Twenty-five people were killed and up to 15 others were missing as a flash flood triggered by heavy rains devastated a riverside community in the Philippines, rescuers said Wednesday. The downpour drenched large parts of Davao city on the southern island of Mindanao on Tuesday night, causing the Matina river to rise and flood its banks, officials said. “Davao City experienced the highest level of floodwaters to date, reaching up to 10 feet (three metres),” the government’s National Disaster Risk Reduction and Management Council said in a statement. Military rescuers have so far recovered 25 corpses after most of the floodwaters subsided Wednesday, said Major Jacob Obligado, commander of a local army battalion taking part in the search and rescue effort. Three of the bodies had not been identified and it was unclear if they included some of the 15 residents declared missing from the area or if there were other previously unknown victims, Obligado told AFP.

Are you questioning what is causing so much revolt in nature? Dawn Lucifer’s human agents try to sooth the public awareness by saying it is the earth going through a recycling stage that will eventually even itself out.

Many will take no notice of the truth of what is about to befall them any more than they did in Noah’s pre-flood era, but all will be infuriated as the world they once knew is no longer hospitable.

Psalm 147:17 “He throws His hailstones like crumbs. Who can withstand His cold?”

Who can withstand anything Father decides to throw evil mankind’s way? No one.