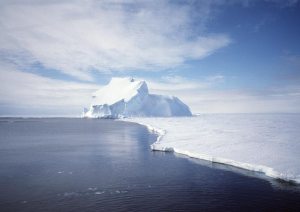 June 28, 2011 – ANTARCTICA – Stronger ocean currents beneath West Antarctica’s Pine Island Glacier Ice Shelf are eroding the ice from below, speeding the melting of the glacier as a whole, according to a new study in Nature Geoscience. A growing cavity beneath the ice shelf has allowed more warm water to melt the ice, the researchers say — a process that feeds back into the ongoing rise in global sea levels. The glacier is currently sliding into the sea at a clip of four kilometers (2.5 miles) a year, while its ice shelf is melting at about 80 cubic kilometers a year — 50 percent faster than it was in the early 1990s — the paper estimates. “More warm water from the deep ocean is entering the cavity beneath the ice shelf, and it is warmest where the ice is thickest,” said study’s lead author, Stan Jacobs, an oceanographer at Columbia University’s Lamont-Doherty Earth Observatory. In 2009, Jacobs and an international team of scientists sailed to the Amundsen Sea aboard the icebreaking ship Nathaniel B. Palmer to study the region’s thinning ice shelves — floating tongues of ice where landbound glaciers meet the sea. One goal was to study oceanic changes near the Pine Island Glacier Ice Shelf, which they had visited in an earlier expedition, in 1994. The researchers found that in 15 years, melting beneath the ice shelf had risen by about 50 percent. Although regional ocean temperatures had also warmed slightly, by 0.2 degrees C or so, that was not enough to account for the jump. “The main reason the glaciers are thinning in this region, we think, is the presence of warm waters,” he said. “Warm waters did not get there because the ocean warmed up, but because of subtle changes in ocean circulation.

Father’s breath formed the polar caps, and Her anger is melting them. But out of Her anger a renovated earth will be the outcome. Father is making all things new.