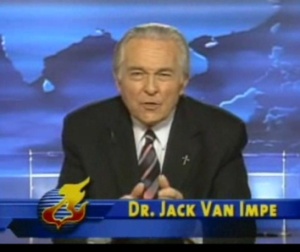 A Christian ministry’s decision to expose as “false teachers” several celebrity ministers it believes are corrupting biblical teachings has prompted a rift, with Jack Van Impe Ministries dropping plans to work in the future with Trinity Broadcasting Network, where it has broadcast for more than two decades.

“I Will Not Be Silenced! I will not allow anyone to tell me what I can and cannot preach,” Van Impe said in a statement when TBN would not allow his program to air.

“When I see heretical teaching leading to apostasy, I will speak out,” he said. “The Bible says ‘All scripture is given by inspiration of God, and is profitable for doctrine, for reproof, for correction, for instruction in righteousness:’ (II Timothy 3:16). The Apostle Paul also gives instructions in Titus 1:9-11, 13 ‘Holding fast the faithful word as he hath been taught, that he may be able by sound doctrine both to exhort and to convince the gainsayers. For there are many unruly and vain talkers and deceivers … Whose mouths must be stopped, who subvert whole houses, teaching things which they ought not, for filthy lucre’s sake…Wherefore rebuke them sharply, that they may be sound in the faith.'”

Van Impe said he immediately called his media agents and told them, “I no longer wanted to air my program on Trinity Broadcasting Network; we will take the tremendous amount of money that we were spending there to obtain new stations that will allow us to continue to reach every square mile of America with the truths of the Bible without this network.”

Source
Satan will soon become emperor of the earth.

“emperor >noun the ruler of an empire.
-ORIGIN Latin imperator ‘military commander’, from imperare ‘to command’.”

A new empire that reflects his and its rebel position to Yahweh’s Sovereignty. No more will he hide it under the wraps of false Christendom.