CNN: 48% believe a Great Depression is coming within a year 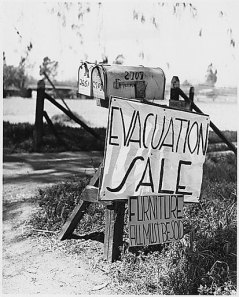 Alternate headline: Great Depression worries go mainstream.  I guess we can count Barack Obama among the 51% who aren’t worried about it, since he’s not even worrying about a double-dip recession.  CNN’s latest poll shows an almost even split between Americans who expect a big collapse within a year, and, er, Americans who aren’t quite as worried about it:

President Barack Obama’s overall approval rating has dropped below 50 percent as a growing number of Americans worry that the U.S. is likely to slip into another Great Depression within the next 12 months, according to a new national poll.

The three-point difference makes this a dead heat within the margin of error.  Moreover, this is the most pessimistic survey result we’ve seen on the subject.  In 2008, only 38% expected another Great Depression, which rose to 41% in 2009 shortly after Obama took office.  In the two years of the Obamanomics recovery, it’s jumped seven points — which shows just how effective people believe Obamanomics to be.

His Osama bin Laden bounce has dissipated, CNN’s analysis concludes, especially among Republicans.  Two weeks ago, 27% of Republicans approved of his performance, but that’s been cut almost in half to 14%.  Independents have also started peeling away, with a five point drop in the same period from 47% to 42%.  His overall approval rating dropped from 54/48 — apparently a math-challenged result in May from CNN that adds up to 102%, so I’m guessing that’s a typo for 54/46 — to 48/48 today.

The residents of the United States are presently feeling the labor pains, and “labor” is mirrored in the loss of jobs that is causing the domino effect as the U.S. economy continues its collapse into the pit of despair.

Isaiah 13:8 “They will be horrified; pain and agony will seize [them]; they will be in anguish like a woman in labor. They will look at each other, their faces flushed with fear.”

Satan asks this question, because children, no one dominates our Warrior Father Yahweh:

Psalm 13:2 “How long will I store up anxious concerns within me, agony in my mind every day? How long will my enemy dominate me?” For as long as it takes… to make a footstool out of your children Satan.