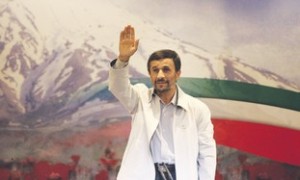 Iranian President Mahmoud Ahmadinejad declared on Friday that the “war on hegemony” was approaching its end, predicting the imminent collapse and subsequent disappearance of the United States and Israel, Iranian Press TV reported.

Ahmadinejad was speaking on the 22nd anniversary of the passing of Ayatollah Ruhollah Khomeini, the imam who took over Iran and established the current Islamic Republic.

Amhadinejad declared that hegemony is the “last impediment to the monotheism front,” and that with its demise the “monotheistic movement” would achieve lasting “prosperity.” He explained that the predominant goal of the “war on hegemony” is to deal with “US domination and Israel’s existence.”

The Iranian president kept an optimistic tone during his speech at Khomeini’s shrine, saying “I am certain that the region will soon witness the collapse of Israel and the US,” DPA reported.

Ahmadinejad has for half a decade been calling for the removal of what he often calls the “Zionist entity” from the Middle East, rhetoric also used by Hezbollah and Hamas of whom Iran supports in their attacks against Israelis.

In 2005, the Iranian president evoked strong international condemnation when he said Israel should be wiped off the Middle East map and moved to the United States or Europe.

This is Satan’s world. The one Mother Israel (Yahweh) promises is not that of the people that took Her personal female name for a short span of time and failed Her by rejecting the Savior She sent. It is under Christ’s Millennial Rule that true peace and harmony will prevail.

Revelation 7:17 “Because the Lamb who is at the center of the throne will shepherd them; He will guide them to springs of living waters, and God will wipe away every tear from their eyes.”

Psalm 17:7 “Display the wonders of Your faithful love, Savior of all who seek refuge from those who rebel against Your right hand.”