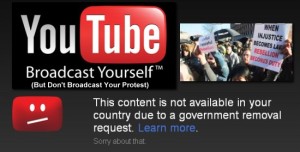 In a frightening example of how the state is tightening its grip around the free Internet, it has emerged that You Tube is complying with thousands of requests from governments to censor and remove videos that show protests and other examples of citizens simply asserting their rights, while also deleting search terms by government mandate.

The latest example is You Tube’s compliance with a request from the British government to censor footage of the British Constitution Group’s Lawful Rebellion protest, during which they attempted to civilly arrest Judge Michael Peake at Birkenhead county court.

Peake was ruling on a case involving Roger Hayes, former member of UKIP, who has refused to pay council tax, both as a protest against the government’s treasonous activities in sacrificing Britain to globalist interests and as a result of Hayes clearly proving that council tax is illegal.

Hayes has embarked on an effort to legally prove that the enforced collection of council tax by government is unlawful because no contract has been agreed between the individual and the state. His argument is based on the sound legal principle that just like the council, Hayes can represent himself as a third party in court and that “Roger Hayes” is a corporation and must be treated as one in the eyes of the law.

The British government doesn’t want this kind of information going viral in the public domain because it is scared stiff of a repeat of the infamous poll tax riots of 1990, a massive tax revolt in the UK that forced the Thatcher government to scrap the poll tax altogether because of mass civil disobedience and refusal to pay.

When viewers in the UK attempt to watch videos of the protest, they are met with the message, “This content is not available in your country due to a government removal request.”

You can also search by country to discover that Google, the owner of You Tube, has complied with the majority of requests from governments, particularly in the United States and the UK, not only to remove You Tube videos, but also specific web search terms and thousands of “data requests,” meaning demands for information that would reveal the true identity of a You Tube user. Google claims that the information sent to governments is “needed for legitimate criminal investigations,” but whether these “data requests” have been backed up by warrants is not divulged by the company.

“Between July 1 and Dec. 31 (2009), Google received 3,580 requests for user data from U.S. government agencies, slightly less than the 3,663 originating from Brazil,” reports PC World. “The United Kingdom and India sent more than 1,000 requests each, and smaller numbers originated from various other countries.”

With regard to search terms, one struggles to understand how a specific combination of words in a Google search can be considered a violation of any law. This is about government and Google working hand in hand to manipulate search results in order to censor inconvenient information, something which Google now freely admits to doing.

Do not continue to turn a blind eye to the signs; you can turn to Yahweh and Christ and escape what is just ahead. Go to them in prayer with a humble heart. Don’t find yourself trapped outside the Ark of safety like those of Noah’s preflood era. If that time progresses upon you and you have not taken the step, you will perish with Satan’s empire and be cast into the pit of eternal destruction. But, the choice must be each of yours – a FREE WILL CHOICE.

Yahweh’s Sovereign Rule, or Satan’s dying empire? The hour glass is running out of sand, and the hour is late, because you are all living in the symbolic last hour spoken of in the Word. Look at what is happening around you in this wicked world. Don’t turn a blind eye to all of it. Then make your decision.

Category : Signs in Government, Signs in Protests and Uprisings, Signs in the Image of the Beast, Signs in Wars and Rumors of Wars
Tags : End Times Signs, Government, Protests, YouTube Censorship