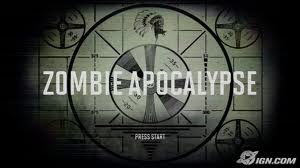 Are you prepared for the impending zombie invasion?

That’s the question posed by the Centers for Diseases Control and Prevention in a Monday blog posting gruesomely titled, “Preparedness 101: Zombie Apocalypse.” And while it’s no joke, CDC officials say it’s all about emergency preparation.

“There are all kinds of emergencies out there that we can prepare for,” the posting reads. “Take a zombie apocalypse for example. That’s right, I said z-o-m-b-i-e a-p-o-c-a-l-y-p-s-e. You may laugh now, but when it happens you’ll be happy you read this, and hey, maybe you’ll even learn a thing or two about how to prepare for a real emergency.”

The post, written by Assistant Surgeon General Ali Khan, instructs readers how to prepare for “flesh-eating zombies” much like how they appeared in Hollywood hits like “Night of the Living Dead” and video games like Resident Evil. Perhaps surprisingly, the same steps you’d take in preparation for an onslaught of ravenous monsters are similar to those suggested in advance of a hurricane or pandemic.

The coming epidemics from tainted water will begin to spread shortly. Hospitals will be overwhelmed by the sheer number of people that are infected. Boiling water is still the best defense against water born diseases, and should also be boiled to bathe with. People living in flooded areas should follow this precaution.

The animal kingdom will also suffer from the effects. Those with pets in the infected areas should boil their drinking water also. Pets that are permitted free range will become infected. Livestock will also be at risk from the new strains of bacteria that are in the toxic brew if permitted to drink the tainted water.

The Antijaboks have done their work. You are now forewarned of what to expect.

One other insight. The underground aquifers are also tainted. Well water is no longer safe in flooded areas even after the waters recede. Be cautious of rainwater, it is also tainted, and what it is tainted with will eventually affect all surface and underground water. No amount of boiling will make it safe.

Soon, Yahweh will be directing the animal kingdom – as they begin to starve – towards humankind as a food source. Those once preyed upon will become the predator. Fear of mankind will be lifted from their instinct and survival will become their driving force.

2 thoughts on “CDC Warns Public to Prepare for ‘Zombie Apocalypse’”