We’ve all heard the horror stories about home foreclosures that have taken place in the US over the last couple of years. However, the following images sent to me in an email really put it into perspective.

The red dots below show the foreclosure locations. 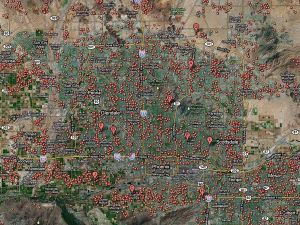 Satan’s latest plan is to flush the U.S. Treasury with newly acquired wealth. He has already laid the foundation for bringing this newly found wealth to his child. If he’s successful, the United States will spiral upward.

Would this be a terrible thing for the world of Satan and mankind? Not from their standpoint. It would mean that the United States has become a Phoenix in its pawn position on the war board of the spiritual war.

If the United States does not continue to spiral into the pit of oblivion and appears to be on the rise, Yahweh has set an hourglass that will run out for not just Satan and his followers, but everyone and everything within this reality. Everything will be completely obliterated out of existence. The LOZ has received the warning from Yahweh, and are diligently continuing to try and bring to bear Her prophecies before the hourglass runs dry.