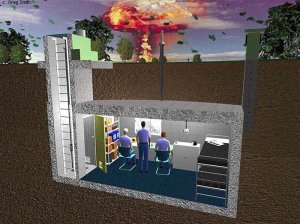 As we’ve noted before on a number of occasions, the US government is preparing for Unlikely Events Like War, Catastrophic Collapse of Society, and Even Asteroids and the Pentagon and Military are Actively War Gaming ‘Large Scale Economic Breakdown’ and ‘Civil Unrest’. In addition to security and law enforcement implications, it doesn’t take much of a stretch of the imagination to come to the conclusion that war gaming these scenarios takes into account continuity of government directives, which means that elite members of reserve government elements need a place to go if the SHTF.

The fact that bunkers exist is no secret, and as was pointed out in the aforementioned articles, there are many of them around the country. Rumor has it that the government has built literal underground cities spanning hundreds of thousands of square feet, complete with everything from nuclear power generation to facilities capable of manufacturing just about any modern day product. The idea is that in the event of a global cataclysm, the human race would be able to survive and thrive, without losing the technological advancements achieved over the last couple of centuries.

The following pictures come to us from a truck driver who has regularly delivered goods to bunker facilities. Most interesting is this individual notes that up until recently, security at these facilities has been somewhat lax and there was never really a visible law enforcement presence. The pictures below show parts of the inside of an underground bunker, as well as a newly visible Department of Homeland Security presence. What this means is for the reader to decide.

It is also important to mention that not all bunker facilities are wholly owned by the United States government. Many, like the one in Springfield, Missouri depicted in the video at the bottom of this article, are reportedly owned by private interests. These facilities have been carved out inside of existing mines and their purpose is not exactly clear, other than they are designed for housing large groups of individuals and/or supplies for extended periods of time – and they’re quite secure and almost impenetrable without heavy duty blasting equipment once the doors are shut.

The governments of the world know what is coming and while they may prepare to survive Armageddon, they in fact will not.

“He will set them apart for destruction,
giving them over to slaughter.”

Father sets each nation on a course of destruction in these end times. No nation shall survive Her cup of wrath. All will be removed for the incoming rule of our King Christ Jesus.

“3 Their slain will be thrown out,”

Cast out of Her memory for non-reanimation.

“and the stench of their corpses will rise;
the mountains flow with their blood.”

Their vessel remains will be so great that the stench will cover this planet. The wild animals will pick their corpses clean.

“4 All the heavenly bodies will dissolve.
The skies will roll up like a scroll,
and their stars will all wither
as leaves wither on the vine,
and foliage on the fig tree.”

The veil will be fully lifted as the great tribulation climaxes and the bowls of wrath have been fully administered. Then comes the pouring out of the cup of wrath that brings with it the final judgment against this wicked world of people that are trapped for execution.