FDA claims power to seize food without evidence of contamination 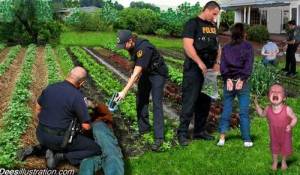 A few hours ago, the Food and Drug Administration declared it no longer needs credible evidence to seize food that may be contaminated. Ignoring the Fourth Amendment entirely, the FDA claims that based on mere suspicion that a food product has been contaminated or mislabeled, and that serious illness or death will result, it can hold the food for 30 days while it then looks for evidence. It claims this power under the Food Safety Modernization Act, which President Monsanto, I mean, Obama, signed in January.

On May 4th, the FDA stated:

“Previously, the FDA’s ability to detain food products applied only when the agency had credible evidence that a food product presented was contaminated or mislabeled in a way that presented a threat of serious adverse health consequences or death to humans or animals.

“Beginning July, the FDA will be able to detain food products that it has reason to believe are adulterated or misbranded for up to 30 days, if needed, to ensure they are kept out of the marketplace. The products will be kept out of the marketplace while the agency determines whether an enforcement action such as seizure or federal injunction against distribution of the product in commerce, is necessary.”

Yahweh’s Sovereign Rule, or Satan’s dying empire? The hour glass is running out of sand, and the hour is late, because you are all living in the symbolic last hour spoken of in the Word. Look at what is happening around you in this wicked world. Don’t turn a blind eye to all of it. Then make your decision.

Satan receives a symbolic last hour to make his stand. That hour began when the LOZ arrived to bring great tribulation with the bowls of anger. Satan is resisting making his stand, but he will be forced to follow through. Due to the earth’s circumstances, food will become scarce, and you will not be able to purchase anything without his mark. But that mark will not doom you – only your heart condition can do that.

Category : Signs in Food Shortages, Signs in Government, Signs in the Economy, Signs in The Mark of The Beast
Tags : End Times Signs, FDA Seizes Food, Food and Drug Administration