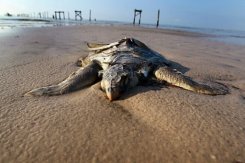 Federal scientists trying to figure out why dolphin deaths along the Gulf of Mexico are up this year now have a second challenge: a sharp jump in sea turtle deaths in some Gulf areas.

“In the past couple of weeks, we’ve seen an increase” in turtle deaths in the northern Gulf, Connie Barclay, a spokeswoman for the National Oceanic and Atmospheric Administration, told msnbc.com.

Since March 15, she noted, 39 deaths were confirmed in Mississippi, 4 in Alabama and 3 in Louisiana.

“The spring time is the typical time when turtle strandings in this region begin to increase,” Barclay added, “but the sharp increases in recent days are of concern.”

“Tests will be done for biotoxins, such as those from harmful algae blooms, which are common in the Gulf,” she said, and NOAA is contacting states to see if fishermen are accidentally hooking sea turtles.

“All causes of death, including petroleum, will be investigated when possible, based on decomposition,” she added, and “all turtles are being carefully examined for signs of external oiling.”

Some 400 sea turtle deaths were reported in the five months after the BP oil spill last April, but the number dropped off sharply starting in October. All seven species of sea turtles are listed under the Endangered Species Act.

The Gulf represents the loss of the first third of deaths to sea life.

The dead sea life from the sea alone, not counting the water fowls, will be so numerous as the dead float to the top of the ocean waters, and the stench of decaying oceanic remains, that it will be impossible to clear the ocean of the deadly brew that will start moving through the ocean currents to other areas of the earth’s oceans that surround this planet; that is what the demons were referring to about the “domino effect.” Even they are smart enough to know that the disruption of sea life is catastrophic; we are talking about the cessation of the lives of millions of fish and other sea borne life forms that will die and rot in the oceans of this planet; shipping goods will be disrupted because of the flotilla of carnage in the sea; as mankind tries to correct the growing catastrophe, they will cause a loss of many ships because things will get even further out of hand.

Revelation 8:8, 9 “The second angel blew his trumpet, and something like a great mountain ablaze with fire was hurled into the sea. So a third of the sea became blood, a third of the living creatures in the sea died, and a third of the ships were destroyed.”