Many carcasses of birds found on, along Route 222 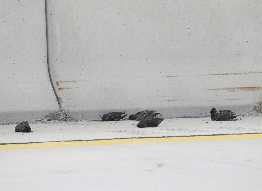 Janeen Grell peered out of her car window Sunday and noticed a bunch of little black things lying along Route 222 in Spring Township.

“What’s that?” she said to her husband.

Grell, 37, of Reinholds estimated that 50 to 100 black birds were lying dead on or along the highway, just north of the ramp from Route 724.

Just what killed so many birds in such a concentrated area remains a mystery.

Though a definitive number of dead birds could not be established, there were enough for Spring police to turn the matter over to the Pennsylvania Game Commission for investigation. Officials there could not be reached Sunday.

It is believed the birds are European starlings.