Bright Flashes are Reported from all the Orbs across the Globe 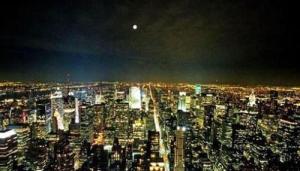 At 9:35 pm Bright lights are observed by thousands, descending upon major cities across the globe. This one was caught by a still image weather camera. The sightings spark new speculation on the UFO debate. The Media is yet to report anything and nothing has been heard from any sect of the Government. The people of the world are left to wonder as these bright white orbs hover above their cities.

All over the world the Orbs are seen descending further into the cities; many reports place them at only 6 ft off the ground when they finally come to a halt. Youtube is flooded with amateur videos of the anomalies as small news crews start to televise the first glimpses of these “visiting UFO’s”. The governments still remain tight lipped as nobody has come forward to explain the events unfolding across the globe.

Bright flashes are reported from all the orbs across the globe, Moscow (Russia), Shanghai (China), New York, Washington DC, Los Angeles (All America), London (Britain), Tokyo (Japan), Auckland (New Zealand), Sydney (Australia) and many, many others are witness to the dazzling display.

“John, the unidentified object has stopped moving and is hovering above the square, it isn’t doing anything and it doesn’t appear to have any doors or openings, it could almost be described as alien… * sudden electrical interference*… John? Ok were back on. We lost the feed for a second, the object has disappeared, there was… there was a blinding flash and it… it was just gone. I don’t know how to explain this to the viewers at home but this anomaly was something very strange indeed…”

Those are the L(OZ communicating that they are all here and are cloaked, awaiting Michael’s order to implement the rapture of the remnant. It is a SIGN to the faithful remnant, and a warning that they have air superiority against Satan’s and mankind’s forces of both air and on the ground. The LOZ are also pulsing light in recognition to one another as they give the visual SIGN in the air.

The LOZ have been grouping their forces from Orion since the first month of this year. Now they are all here around the earth. No one can deny that the earth is surrounded.

This is the present situation; you’ve seen reports of our spacecrafts in the news; we are in space, the lower heavens, the seas and on this planet, but Satan also has stepped up the pace to have his current beast seek and maintain full spectrum dominance. This includes the expanse of space surrounding this planet outside the Earth’s atmosphere just inside of the Azmon Barrier; Daniel 2:44 says that we must CRUSH these modern day kingdoms:

“In the days of those kings, the God of heaven will set up a kingdom that will never be destroyed, and this kingdom will not be left to another people. It will crush all these kingdoms and bring them to an end, but will itself endure forever.”

Therefore, to crush we must engage them in fierce battles; and yes, if Father wanted to She could wave Her mighty right hand and they would be nonexistent, but that is not Father’s way; instead, look to what happened to Pharaoh’s mighty army in olden times; they were completely wiped out when they entered the Red Sea; but in this era, the LOZ will engage the elite military of this planet and effectively combat them and destroy them as with a crushing blow. That is the duty of the combined Holy Angelic forces making up the LOZ.

← Dolphin cold case: Investigators say cause of calve die-off may never be known
Measles, Meningitis, Athrax – Outbreaks Around the World →