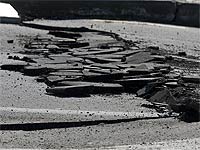 Live video footage showed parts of buildings collapsed into the streets, which were strewn with bricks and shattered concrete. Sidewalks and roads were cracked and split, and hundreds of dazed, screaming and crying residents wandered through the streets as sirens blared throughout the city.

Christchurch Mayor Bob Parker said he was on the top floor of the city council building when the quake hit just before 1 p.m. local time, throwing him across the room.

We are currently in the Tribulation and the severity is about to become much worse. If you think things are bad now, you can’t imagine how bad they will become.

Satan is not the cause of what is occurring in the world via natural disasters, plagues, pestilence, financial crisis and all the rest. It is Yahweh’s will and it comes directly from Him. He is the One in control, and the One whom is nature.

Psalm 83:18 “May they know that You alone – whose name is Yahweh – are the Most High over all the earth.”

Ezekiel 28:23 “I will send a plague against her and bloodshed in her streets; the slain will fall within her, while the sword is against her on every side. Then they will know that I am the LORD.”

← Blue Lights Recorded over Austin Texas Feb 19, 2011
Would You Like to End This Spiritual War Early? →