Major die-off of fish along lakefront 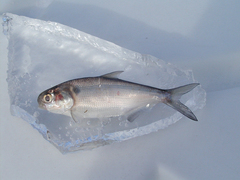 A bizarre scene is evolving on the Chicago lakefront, with Canada geese and mallard ducks gulping down dead or dying gizzard shad. A major die-off of what appears to be the 2010 class is happening in Chicago harbors. Thousands, perhaps far more than that, of dead gizzard shad in the 3- to 5-inch range are frozen in the ice of Chicago harbors or floating around in open patches of water. “Gizzard shad are pretty sensitive,’’ Lake Michigan Program biologist Dan Makauskas said. “On the toughness scale, the herrings are pretty soft.’’Gizzard shad, members of the herring family, are more sensitive to drops in oxygen levels than most fish. And thick ice came early to Chicago harbors in December.  The massive die-off was first documented Thursday by Carl Vizzone, a North Side fisherman who sits on the board of Perch America. What caught his eye was Canada geese and mallards eating dying shad at open water by DuSable and Diversey harbors. “This is not normal,’’ he said.

Justice SQUARED X 4. This also reveals that everything, including the animal kingdom is involved in this war that ravages throughout the creation. It also gives insight that just as our Mother can met out four kinds of Judgment, She can also PROVIDE for, or institute PROVISIONAL LAW that is set into motion for a specific purpose.

Jeremiah 15:3 “I will ordain four kinds [of judgment] for them”—[this is] the LORD’s declaration—”the sword to kill, the dogs to drag away, and the birds of the sky and the wild animals of the land to devour and destroy.”