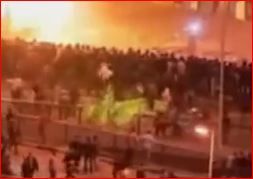 Egypt has always been a place of mystery, but this mystery was captured on tape. Late on Thursday, MSNBC was showing images of Tahrir Square while covering the latest developments on the Egypt situation, when suddenly a greenish horse with rider running away appeared out of the blue.

“And I looked, and there was a pale green horse. The horseman on it was named Death, and Hades was following after him. Authority was given to them over a fourth of the earth, to kill by the sword, by famine, by plague, and by the wild animals of the earth.” Revelation 6:8 (HCSB)

It’s happening now. The Pale Horse and its Rider are bringing the Apocalypse to Mankind’s door. But before the Great Tribulation comes to pass, the Rapture will occur. Meantime, what has happened of late in Louisiana and Mississippi is only a small taste of what is to occur worldwide. From this point on, it will only get worse. It is also part of what will bankrupt the world financial system. Look for one disaster upon another from this point on. Satan is powerless to stop the prophecies from coming to pass, even though he is shown standing in opposition of the Pale Horse and its Rider.