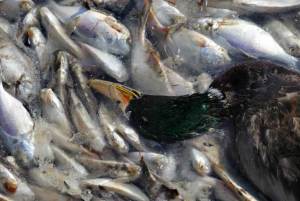 WINDSOR, Ont. — There’s an increasingly smelly fish-and-duck soup at the mouth of Little River as thousands of dead shad and several dozen dead ducks blanket the water’s surface, causing some alarm among residents.

“It seems a little strange,” said Mike Stoyshin, who noticed the mass of dead gizzard shad in the river while going for a walk Tuesday evening.

When he got a little closer, he realized there were several dead mallard and merganser ducks floating among the fish.